If you put enough fleets together and start talking service, it doesn’t take long. Sooner or later, you’re going to talk about the technician shortage.

Moderated by Stu MacKay of MacKay & Company, six fleet representatives spent the better part of an hour discussing the issues they see in how their business and the aftermarket recruit and train heavy-duty technicians.

Starting with recruiting, Lee Long with Southeastern Freight Lines says the entire trucking industry needs to a better job supporting students who are interested in technical work and trucks. He says this includes not just getting in front of students and alerting them to trucking’s career opportunities, but also supporting those students when they decide to pursue a technical education.

Southeastern Freight Lines has started bringing Nashville Auto Diesel College (NADC) students into its facilities as interns and part-time employees to help acclimate them to their future career.

Long says most of “those kids are flipping burgers while they’re in school” and not working for service providers, and that’s a problem, he says. Service providers should be selling their businesses as a way drive interest, he says.

Additionally, training young technicians—while in school or when they are hired—is another priority, the panel says.

Fleet Consultant Dwayne O. Haug says fleets, dealers and aftermarket service providers all require assistance from their suppliers to properly train their employees. Haug says service centers that are overlooked by their suppliers not only hurt the service company itself, but also weaken the brands they support. In the case of the aftermarket, this can be devastating. A service center with poorly trained technicians will be unable to compete in the future, Haug says.

And Monday’s fleet panel wasn’t focused only on the service channel.

Parts dominated the second half of discussion. Regading parts acquisition, each fleet representative said their No. 1 priority is accessibility and speed.

Speaking on a standard repair, Roy Svehla with Republic Services says the hard part for him in scheduling service is typically minimizing downtime and maximizing bay availability.

“The easy part should be [acquiring] the part,” he says. “And if I can’t get it I’m losing shop capacity.”

Speaking on behalf of private fleets, Tom Moore with the National Private Fleet Council says most of his members are also trying to concentrate their buying with their strongest and most supportive suppliers.

Pliler and Moore also specifically mention online sales and support as a factor in determining suppliers. Pliler says Swift is buying (and selling) a significant amount of parts online, and pushes its suppliers to support that channel with the level of customer service found through dealers and distributors. Moore concurs, and believes it is possible for suppliers to do both.

Looking at conventional channels, Svehla says he wishes the independent aftermarket was as adept at cross-referencing parts as OE dealers. He says improvements there would almost assuredly strengthen the channel.

Haug says a stronger aftermarket is good for buyers and sellers alike. 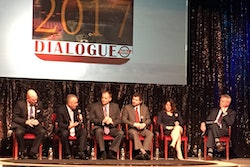 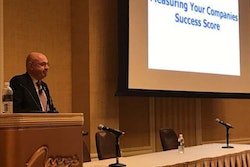 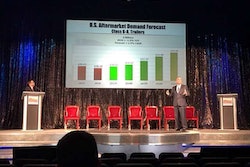