As the main coupling device between a tractor and trailer, the fifth wheel is one of the most important operational and safety features on a truck.

But due to its simple use and low failure rate, it’s often taken for granted.

It’s the type of part a customer might not give much thought to until it breaks down. And if that happens, it’s probably too late.

“It doesn’t take a lot to maintain [a fifth wheel] but it can be really bad if you don’t,” says Aaron Puckett, director of fleet sales at Fontaine Fifth Wheel.

By adding fifth wheel service to a preventive maintenance offering, service providers can give customers peace of mind knowing that when they couple their tractors to a new load, they have nothing to fear.

“If a fifth wheel is properly maintained, it will last,” Puckett says. “You can get a million miles or more out of them.”

Puckett says Fontaine Fifth Wheel advises customers to check their fifth wheel for cracks, dents and other system malfunctions during every trailer connection. A cracked or disfigured fifth wheel can impact the component’s ability to hold a kingpin in place, as can any problem with the fifth wheel’s locking mechanism, he says.

Today’s fifth wheel products are built to last, but even the best engineering will sometimes be foiled by an accident or coupling collision.

When those types of problems are found, a fifth wheel should immediately be replaced, says Rob Nissen, national service manager at SAF-Holland.

“If something is bent and not hooking up properly you shouldn’t keep using that fifth wheel,” adds Robert Marsh, national sales manager at JOST Interna- tional. “It could be at risk for a failure.”

When providing basic maintenance on a fifth wheel, Puckett says grease is the word.

A fifth wheel has a dirty job. During service maintenance checks — Puckett recommends fifth wheels be serviced every 30,000 miles or 90 days — or coupling into a new trailer, it is important to make sure the component isn’t covered in dirt, grease and grime.

The fifth wheel works best when it’s been lightly lubricated.

“A fifth wheel is a mechanical device. It takes grease to make it work, but too much grease — when it’s also covered with salt and sand — will almost make it so it’s like clay on top of the fifth wheel. In those situations it’s not going to close as well,” Puckett says.

This is especially true in the winter, adds Marsh.

“The more grease you have the more likely it will gum up and that can cause the fifth wheel to not work properly,” he says.

Each OEM says its fifth wheel products are designed with grooves in the face of the fifth wheel where lubrication is best applied. Marsh recommends cleaning those areas of dirt and debris before adding grease to ensure proper lubrication.

This creates an optimal surface for the trailer’s landing gear, Puckett says.

“It allows you to alleviate chatter,” he says, and describes chatter as vibrations created by a poor fifth wheel connection that can spread throughout the rig. Lubrication also improves the functionality of the locking mechanism, adds Nissen.

“Lubrication is critical to not only the surface or face of the wheel, but also in the locking mechanism on the bottom side of the wheel,” he says. The lock’s moving parts also should be kept clean and lightly lubricated because they have to work as part of a timing movement during locking and unlocking.

A fifth wheel’s locking mechanism should be visibly checked as well.

“Drivers are known to miss things and make mistakes,” Puckett says. “We advise technicians check the locking mechanism and the pull handle, makes sure the springs are working, activate the [spring] cylinders [during a PM]. You want to make sure nothing has been damaged.”

Marsh says JOST offers a lock tester to use during these inspections. The tester simulates a fifth wheel locking into a kingpin and allows the technician to ensure the connection is secure.

Marsh says a lock tester should be snug within a fifth wheel connection but not immovable.

“You shouldn’t have any play and it shouldn’t move [vertically or horizontally],” he says, “but you want to be able to rotate the lock tester pin within the lock.

“If you rotate it and you have some resistance then [the fifth wheel] is too tight.”

A fifth wheel that is correctly connected and locked will not come loose, Puckett says, but that doesn’t mean the lock is immune to wear. Today’s kingpins are extremely robust, and can slowly weaken the interior of a fifth wheel lock over time.

And Marsh advises not to forget the kingpin when checking a fifth wheel lock. A bent or worn kingpin will reduce the quality of a connection.

Usage also can impact the rate at which a fifth wheel wears down. Service providers should ask their customers about their duty cycle when cleaning and maintaining a fifth wheel.

A fifth wheel that is pushed to the brink in severe-duty applications might require additional maintenance inspections, the OEMs note.

“Application is critical to the longevity of the fifth wheel,” says Nissen, adding that it’s a good idea to notify a customer if they might benefit from spec’ing a different fifth wheel option.

“We outline use in our literature: standard duty, moderate duty and severe Service Bay duty,” he says. “These classifications outline what the vehicle is going to see, as to how much on road versus off road, and the type of loads as to weight that the fifth wheel will be exposed to.” 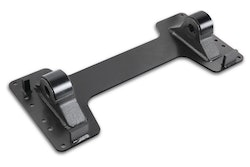 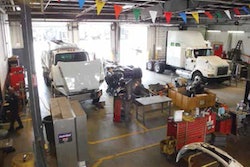 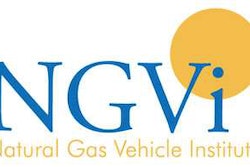