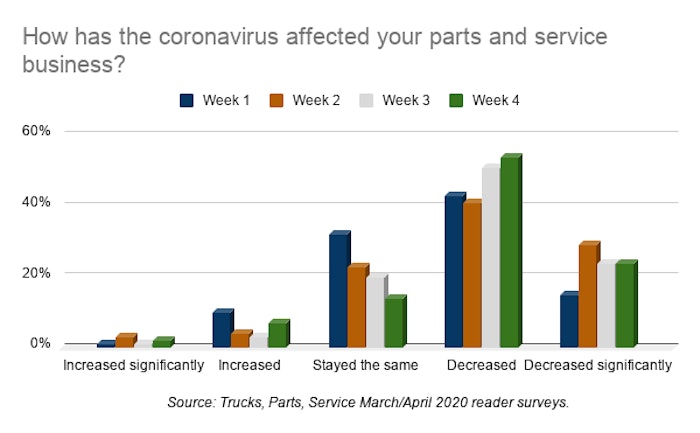 The sales hit to trucking’s dealer and aftermarket channels due to the COVID-19 coronavirus pandemic finally, mercifully, appears to be leveling off, according to the results of the fourth Trucks, Parts, Service weekly reader survey on business conditions that was completed Wednesday.

Survey results indicate equipment and parts and service sales continue to slip nationwide, but at a slower rate each week, indicating a new normal appears to be taking root across the industry.

Among parts and service operations, 78 percent of TPS survey responders this week said their business remains down since the start of the pandemic. That number is 3 percent higher compared to last week but the smallest week-over-week change since the TPS reader survey began last month. Separated by channel, independent operations seem to be struggling more than their suppliers and dealer counterparts — with a combined 83 percent claiming their business has decreased or decreased significantly. Only 54 percent or dealers and suppliers now claim their parts sales remain down.

There’s less optimism, but more acceptance of a new reality, in the equipment space.

“Sales are dead,” said one responder; another noted, “it is a roller coaster. Some days we are busy and some we slow down.”

Slightly more dealer responders expect sales to stabilize or even rise in the coming months — 16 percent of new truck dealers and 13 percent of used truck dealers are preparing for sales upticks — but even those who are predicting a new status quo said that doesn’t mean people should feel good about what is ahead. More certainty about the market makes it easier to business plan but it doesn’t mean customers are going to come back. Or that they’ll even be allowed to come back.

“Stay the same means zero sales,” said one dealer. “Can’t get lower because we are not allowed to sell.”

That latter statement also shines a light on the growing political debate surrounding COVID-19 and state and federal response to coronavirus. Business leaders across the aftermarket and dealer channels are becoming exasperated by poor coordination and indecision from all levels of government.

“There needs to be a communication of what works best in the recovery process and results need to be shared,” said one responder.

Many TPS responders who applied for the financial support are not optimistic. One responder said the “funds ran out when our application was in the review process,” and another said their bank failed to complete their application process in time. A new law is expected to be signed by President Trump as soon as possible to replenish the PPP, but other responders say it could be too little too late.

“There is a market but the chaos we all are going through and the inaction of Congress on small business assistance is proving to be a real ‘nail in the coffin’ for my organization,” he said.

Regarding our question ranking business conditions last week and predicting the week ahead on a 1 to 10 scale (with 1 being the worst week ever and 10 being the best), TPS responders felt last week was slightly worse than the week prior, falling to 4.38 from 4.52 last week. Impressively, that 4.38 score was equal to what the industry had predicted for the week on our prior survey, and this week’s responders believe this week will conclude around a 4.46. Sentiment is slightly higher for the month ahead, with responders predicting a 4.74 overall.

But even with pockets of optimism, it’s clear many in the aftermarket and dealer channels have been pushed to the brink by the pandemic. Asked about what the biggest lasting change to the industry will be due to coronavirus, TPS survey responders were forthcoming with their concern.

“Trying to pick up where we left off will be tough for a while,” said one responder; another mentioned the importance of building confidence back up and a third offered concern about “getting to the point where people aren’t afraid to deal with people again face-to-face again.”

“This is going to take a long time to subside, maybe two years, but eventually … many will go back to the way things were,” added one responder. “Unfortunately, we will go through a period of financial instability.”

To participate in next week’s Trucks, Parts, Service survey regarding business conditions in the aftermarket and dealer channels due to the COVID-19 coronavirus pandemic, please CLICK HERE.