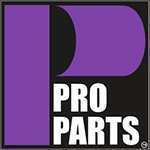 The first Pro Parts Annual Meeting was a busy one.

The three-day event included one-on-one meetings, a product expo and social activities encouraging interaction between members and suppliers. The product expo included promotions offered by suppliers that generated more than $1 million in sales for the one day event.

After such a successful first meeting, Pro Parts says plans are already in motion for its next annual meeting, from Dec. 7-10, 2015, in Clearwater Beach, Fla.

For more information about the Pro Parts network, or to join, contact Executive Vice President John Younger at 859-795-0579, or jyounger@proparts1.com.