The chassis-mounted charge air cooler, originated by Volvo and Mack, was a breakthrough in engine power and efficiency, paving the way for the diesel engine’s ability to meet extremely tight particulate and NOx emissions regulations.

By increasing the density of the air entering the engine, the device increases power. Allowing the engine to ingest the maximum amount of air at the lowest possible temperature reduces compression temperature and engine heat stress and helps combustion efficiency. 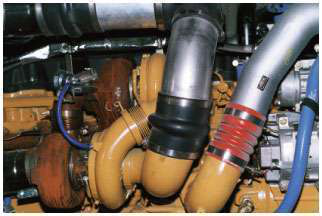 This Caterpillar Acert dual turbo arrangement has typical high- and low-pressure hoses that prevent combustion air from leaking out while helping to protect engines from airborne dust.

For these reasons, an efficient charge air cooler helps guarantee optimum fuel economy and the lowest possible engine-out particulate and NOx emissions. It also minimizes cooling system stress, since heat not removed in the charge air cooler must be taken away by the radiator.

Customers also may report they heard a “pop” sound right before power dropped off, which can indicate the failure of a hose or hose clamp, says Mike Arzamendi, Peterbilt dealer training director.

The cooler should be serviced as soon as it’s clear that its performance is borderline. A bad charge air cooler also can put extra stress on the turbo and exhaust manifold, according to Cummins.

Routine inspection – at least at every oil change – is critical to maintaining performance. Reduced airflow through the outside of the cooler and dirty surfaces can affect performance just as much as leakage from the pressurized side. 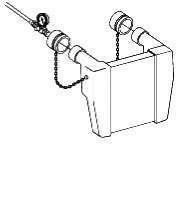 A charge air cooler can be leak-tested with a kit consisting of pressure caps and connections for an air hose and pressure gauge.

The number one issue is dirt, mostly in the form of bugs. Experts suggest regular inspection of the area behind the cooler and the unit itself for clogging. Donnelly suggests flushing the unit out from the rear with a pressure washer designed to treat truck finishes gently, while Nichol suggests a stiff nylon brush.

And when bugs form the worst kind of goo, it’s best to remove the device to flush it out from the rear, says Ed Saxman of Volvo Powertrain.

A careful inspection around the unit, with the hood closed, will reveal any wayward air seals or flaps blocking airflow, or any hood or other body parts that may have settled or shifted sideways so as to cause rubbing.

This problem often can be fixed before the cooler perforates and leaks. The condition of clamps and hoses and clamp tension also are important. Newer spring-type hose clamps may not need to be retorqued routinely, but some hose clamps do; check the owner’s manual. Also check for bent or damaged fins; if they are only bent, a fin comb may allow a careful technician to straighten them.

If there is a reason to believe the cooler is leaking – such as unusual noises or reduced boost pressure in spite of a healthy turbo – purchase a test kit with rubber plugs and fittings.

Test the unit for leakage by first undoing the clamps and disconnecting its hoses, removing the unit, installing the plugs in the inlet and outlet connections, and installing a pressure gauge onto the test rig.

Then fill the unit with compressed air up to about 30 psi, cut off the airflow and measure how fast it leaks down. There are different specs, but the most common is 5 psi in 30 seconds; check with the engine manufacturer for the exact number.

Hoses may last a million miles, and the normal failure mode would be some sort of abrasive wear to the exterior, says Steve Egleston, heavy truck lead engineer at FlexFab, who recommends that technicians inspect them at infrequent intervals by checking for surface damage after cleaning the hoses gently with a damp cloth to see the surfaces better.

“Look for nicks and cuts, and make sure that nothing is damaging the system’s hoses,” he says. “If the hoses are functioning properly, and the damage has not progressed past the outside layer, the hose is OK.”

Also check for contact wear by making sure that nothing on the truck, such as wiring or other hoses, is touching the cooler hoses. Securely tie any nearby items away from the cooler.

“Keep an eye where the support rings and hose clamps bear against the outside of the hose,” Egleston says. “If they see white textile material, the hose could develop a leak. This kind of wear reduces the strength of the hose and could lead to complete failure.”

Make sure the clamps are installed straight. The proper clamping angle is important because, once a leak starts, heat isn’t transferred away from the hose the way it should be, and it’s likely to overheat. Make sure the clamps are torqued to the manufacturer’s recommendation. “We expect the clamp to remain at initial torque because the rubber underneath will get a compression set,” Egleston says.

Egleston also recommends that technicians walk around the truck with the engine idling and listen for turbulent high-pressure air that will sound like a hiss or roar. If they hear a possible leak, they should ask a helper to accelerate the engine, which will boost pressure and make such a problem easier to detect.

When the hoses are removed for repair, inspect them carefully inside.

Check the liner for chalky deposits that would indicate overheating. In case the hose material has adhered to the connection, clean the connection thoroughly before installing the new hose, as the residue would interfere with proper sealing.

Some problems can be hard to diagnose. A turbo oil seepage can cause soot to stick and coat the interior of the cooler, blocking its ability to remove the heat of compression from the turbo, Arzamendi says.

Such clogging can create a vicious circle on the latest vehicles; the clogging results in higher intake temperatures, which will raise NOx and cause the exhaust gas recirculation system to increase flow, which in turn will increase clogging. To find such a problem, disconnect the plumbing and inspect the interiors of the hoses and tubing.

Ask customers about higher-than-normal operating or exhaust temperatures, low boost pressure and a fan that comes on too late as engine temperature rises.

Your customers will thank you for doing these things to keep their charge air coolers cooling by delivering maximum efficiency, long life and, most likely, better oil analysis reports.