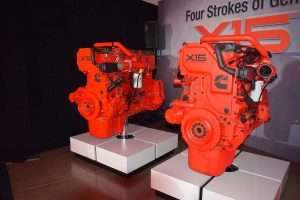 Barely a year removed from the launch of its X15 heavy-duty engine, Cummins has already set its sights on the platform’s growth.

Cummins’ 12 liter X12 engine will join the lineup next year, targeting vocational, regional and bulk haul weight sensitive applications with the highest power to weight ratio in the industry.

Steven Reedy, program leader for the Cummins X12, says the engine weighs 2,050 lb., making it the lightest heavy-duty engine in the market – about 600 lb. lighter than nearest 13-liter engine and 150 lb. lighter than the nearest 11 liter.

“It’s similar in size and weight to a pre-EGR [Cummins] ISM11 engine,” Reedy adds. “You can have new technology without all the extra weight and baggage that goes with it.”

Much of the engine’s weight-savings comes through its design. For example, the engine block has been sculpted and ribbed to minimize weight.

“We only put material where the tools tell us we need it,” Reedy says.

The fan bracket has been hollowed out, removing material that didn’t serve a structural purpose. The engine’s simplified modular design also reduces complexity.

The X12 will share several components with the X15, including the Cummins Holset VGT Turbo, XPI fuel system and engine control module.

“It’s trying to use that information – those learnings that we’ve had in the market – see what’s worked and apply it to this,” Reedy says.

Cummins says the company has sold nearly 35,000 X15 engines in North America to-date, but work is already underway on the engine’s evolution.

The engine is expected to be approximately 300 lb. lighter than X15 model it will replace and will package similarly to a 13 liter, allowing for simplified instillation in the aerodynamic trucks of the future.