Last year was another record setter at Paccar. The truck OEM announced Tuesday it achieved its 79th consecutive year of net income and record revenues of $19.46 billion in 2017, a 14 percent increase over 2016.

“Paccar’s financial results reflect the company’s premium-quality products and services, record heavy-duty truck market share in the U.S. and Canada, record aftermarket parts results and a strong European truck market. I am very proud of our 25,000 employees who have delivered outstanding products and services to our customers,” says CEO Ron Armstrong.”

Thanks to such consistent profitability and strong cash flow, Paccar says it has been able to continually invest in its core markets and expand its presence in emerging markets.

In reporting its earnings Tuesday, Paccar says it achieved record quarterly net sales and financial service revenues of $5.45 billion in the fourth quarter 2017 compared to $4.07 billion for the same period in 2016. It earned $589.2 million ($1.67 per diluted share) for the fourth quarter of 2017, including $173.4 million of net tax benefits resulting from recent changes to U.S. tax law.  Paccar says the one-time net tax benefits include a reduction of net deferred tax liabilities of $304.0 million, partially offset by a tax on accumulated foreign earnings of $130.6 million. Excluding the one-time tax benefits, Paccar states it reported adjusted net income (non-GAAP)1 of $415.8 million ($1.18 per diluted share). The company earned $288.8 million ($.82 per diluted share) in the fourth quarter of 2016.

Paccar estimates that its 2018 effective global tax rate will be 23 to 25 percent, compared to approximately 31 percent prior to the new tax law.

Additionally, Paccar says it declared cash dividends of $2.19 per share during 2017, including a special dividend of $1.20 per share paid in January 2018. This compares to cash dividends of $1.56 per share declared in 2016. Paccar’s dividend yield was an excellent 3.1 percent as of December 31, 2017. The company says it has paid a dividend every year since 1941.

Among the company’s business highlights in 2017:

“Truck demand is increasing due to good economic growth, increased consumer spending, and strong commercial and residential construction, which has resulted in record freight tonnage and high fleet capacity utilization. U.S. and Canada Class 8 truck industry retail sales are expected to increase to a range of 235,000 to 265,000 trucks in 2018,” said Gary Moore, Paccar executive vice president. “Kenworth and Peterbilt achieved record Class 8 retail market share of 30.7 percent in the U.S. and Canada in 2017, compared to 28.5 percent in 2016. Customers benefited from Kenworth and Peterbilt vehicles’ outstanding fuel efficiency and reliability.” 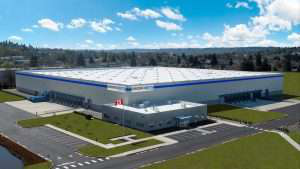 “Paccar Parts’ business growth has been driven by investments in distribution and technology, initiatives such as the TRP all-makes parts stores and a growing population of Kenworth, Peterbilt and DAF trucks, powered by Paccar engines,” says David Danforth, Paccar vice president and Paccar Parts general manager.