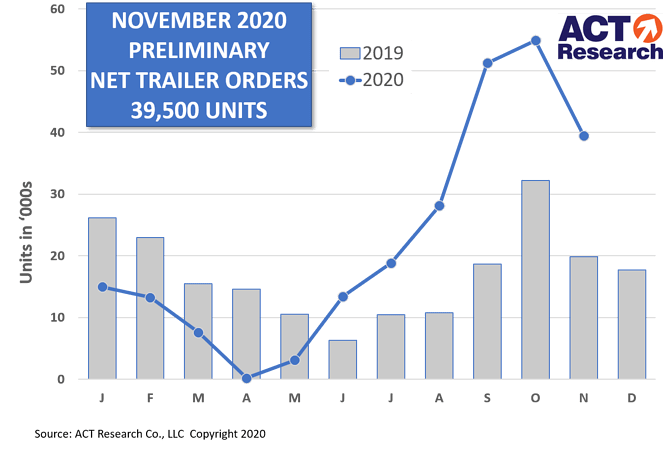 ACT Research reported Wednesday preliminary U.S. trailer orders for November at 39,500 units. While down 28 percent from October, November volume was nearly double that seen in the same month last year.

ACT say the trailer industry has now had six consecutive months with solid year-over-year gains in net orders, and November will likely rank in the industry’s top 10 months.

“While November orders were down sequentially versus October, that matches the order pattern for last year. Remember that October was the third-best net order month in history, so that set up a tough comparison for the industry,” says Frank Maly, director, commercial vehicle transportation analysis and research, ACT Research. “Dry vans have been the foundation of the recent order surge, and that pattern continued during November. While more than twice the pace of last November, dry van orders appear to be roughly two-thirds of October’s level.

He adds. “Freight rates continue at robust levels, resulting in solid expectations for fleet financials. That means fleets have both the need and ability to invest in equipment.”

Maly also notes that given concerns regarding availability and timing of production slots in 2021, since existing backlog extends to nearly the end of third-quarter 2021 at current production rates, “fleets pulled their order timing forward this year, resulting in the October volume peak.”