Prices in the auction space were up almost across the board in May. J.D. Power's benchmark group of 4- to 6-year-old trucks brought 11.9 percent more in May than April. J.D. Power also notes the increase made up for last month's surprising downswing, which the company attributed to a small volume total for the month.

Pricing within the benchmark model included:

"To be clear, we have not seen any letup in actual pricing since the runup began last year. Compared to the first five months of 2020, this group is running 80.3 percent ahead," the company states. "It’s no surprise that 2021 would perform much better than 2020, but our benchmark group is also bringing by far the highest pricing in the six years we’ve been tracking it. Supply of off-lease trucks should gradually ramp up later this year, but we don’t see much impact to used truck pricing this summer."

Retail pricing was even stronger and continues to accelerate. The newest available sleeper tractors are bringing pricing "at or above the highest peak months in the post-Great Recession period."

Within the most common 2- to 6-year-old cohort, May’s average pricing was:

Month-over-month, late-model trucks brought 7.1 percent more money. In the first five months of 2021, J.D. Power says late-model trucks are running 16.3 percent ahead of the same period of 2020 and the company expects late-model pricing in June to clearly surpass the highest months in post-Great Recession period.

Retail sales volumes weren't quite as strong as inventory continues to limit sales totals. J.D. Power says dealers retailed an average of 5.2 trucks per rooftop in May, 0.4 trucks lower than April. In the first five months of 2021 dealers are running a healthy 1.6 trucks ahead of the same period of 2020.

"We expect traffic to remain relatively solid in the summer. Looking forward, most trucks should see mild to moderate retail appreciation into the third quarter. Later in the year, economic factors should start moving back towards trend and truck availability should expand, limiting price appreciation," she says.

The medium-duty space was the only segment of the market that stumbled at all in May, J.D. Power states.

Overall, the company says the used truck market continues to show great strength and is well on its way to a great year.

"We are now more than a full year into the freight market recovery, with no letup in pressure as of this writing in mid-June," the company says. "At this point, auction pricing for late-model sleepers is higher than any time in the six years we’ve been tracking our benchmark group, and retail pricing is at or above any period in the 12 years following the Great Recession."

The company adds, "We expect June’s retail results to more clearly set records. We forecast returning supply of trades to increase mildly in the third quarter, but it looks like the freight environment should remain strong enough to keep demand for late-model trucks healthy. For now, make hay while the sun shines. As the summer progresses, keep an eye on the volume and pricing of off-lease fleet units sold at the auctions. Any market shift will be seen there first." 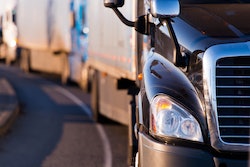 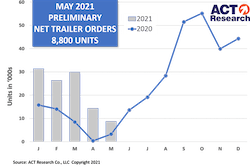 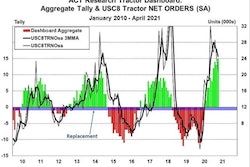 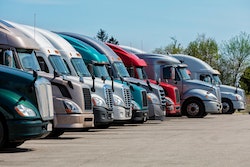