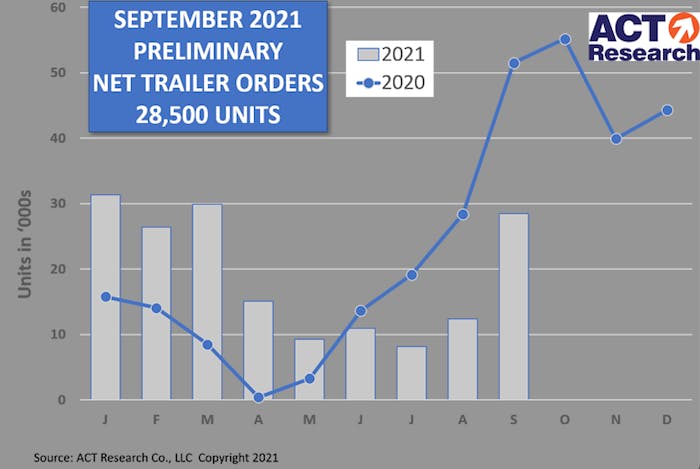 Preliminary reports show trailer OEMs posted 28,500 net orders in September. That was a 130 percent sequential surge over August, but trailed the same month last year by 45 percent, according to ACT Research’s State of the Industry: U.S. Trailers report.

“We’ve been awaiting the opening of the 2022 orderboard, and that finally occurred during September. While demand remains very strong, that action was not universal as the market was a mix of OEMs accepting orders while some remain on the sidelines. Concerns about component and materials pricing and availability, as well as staffing challenges, were noted as the major reasons for continued reticence in order acceptance,” says Frank Maly, ACT director CV transportation analysis and research.

“The major impetus in September came from dry van orders, which will extend already long lead times further into next year. There was also a notable churn in the backlog, as new orders approached 34,000 trailers for the month. That means cancellations came in at the highest level since April of this year, but it appears many were due to cancel/re-orders, as some delivery commitments likely shifted from 2021 to 2022. With fleet demand still strong, expect further order strength in upcoming months as more OEMs begin to book orders for the new year,” Maly says.

ACT’s final September volume will be available later this month. This preliminary market estimate should be within +/- 5 percent of the final order tally. 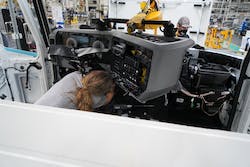 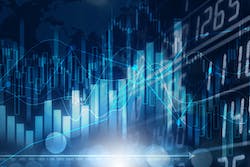 HDMA Pulse: Add inflation to the list of manufacturers’ woes 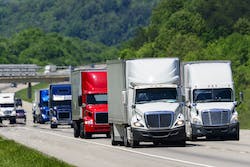 Commercial vehicle demand remains “as good as it gets” 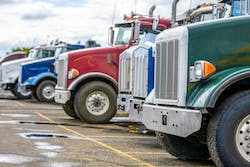