After two consecutive weekly increases, the national retail price of on-highway diesel dipped 0.9-cent to $2.951 per gallon during the week ending Monday, Sept. 27. The price of diesel is 35 cents higher than the same week last year, according to the U.S. Department of Energy’s Energy Information Administration. 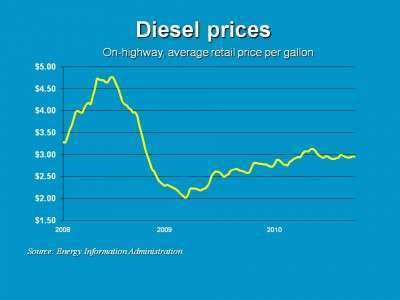 Diesel prices declined in all regions except the West Coast and New England, which were up 0.1-cent and 0.7-cent, respectively. The Rocky Mountain region enjoyed the largest decline at 2.3 cents, followed by the Midwest at 1.6 cents.

As usual, prices were highest in California at $3.139 a gallon, followed by $3.121 in other West Coast states. The nation’s least expensive diesel by region, $2.883, was found in the Gulf Coast region.

Average retail prices for all regions are available on EIA’s website.