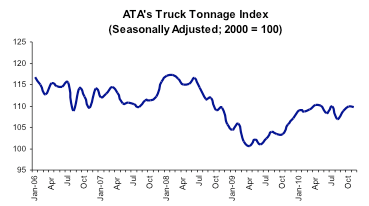 The American Trucking Associations’ advance seasonally adjusted (SA) For-Hire Truck Tonnage Index edged 0.1 percent lower in November after increasing a revised 0.9 percent in October. In September and October, tonnage increased a total of 2.8 percent. The latest reduction put the SA index at 109.7 (2000=100) in November from 109.9 in October.

The not seasonally adjusted index, which represents the change in tonnage actually hauled by the fleets before any seasonal adjustment, equaled 108.9 in November, down 3.7 percent from the previous month.

Compared with November 2009, SA tonnage climbed 3.9 percent, which was significantly lower than October’s 6 percent year-over-year increase. Year-to-date, tonnage is up 5.9 percent compared with the same period in 2009.

ATA Chief Economist Bob Costello says that he is not overly concerned with the small decrease in tonnage during November. “Tonnage increased for two consecutive months in September and October and I don’t expect volumes to rise every month.  Additionally, the decrease in November is much smaller than the gains during the previous two months.”  Costello says he expects truck freight tonnage to grow modestly during the first half of 2011 before accelerating in the later half of the year into 2012.

Note on the impact of trucking company failures on the index: Each month, ATA asks its membership the amount of tonnage each carrier hauled, including all types of freight.  The indexes are calculated based on those responses.  The sample includes an array of trucking companies, ranging from small fleets to multi-billion dollar carriers. When a company in the sample fails, we include its final month of operation and zero it out for the following month, with the assumption that the remaining carriers pick up that freight.  As a result, it is close to a net wash and does not end up in a false increase.  Nevertheless, some carriers are picking up freight from failures, and it may have boosted the index. Due to our correction mentioned above, however, it should be limited.

ATA calculates the tonnage index based on surveys from its membership and has been doing so since the 1970s. This is a preliminary figure and subject to change in the final report issued around the 10th day of the month. The report includes month-to-month and year-over-year results, relevant economic comparisons, and key financial indicators.