“The UAW Local 163 offered operational and production flexibility that enabled the decision for the DT12 and new DD15 proprietary asymmetric turbocharger production to be placed at the Detroit brand headquarters in Redford, Michigan,” said Martin Daum, president and CEO, Daimler Trucks North America.  “Additionally, the State of Michigan and Redford Township provided economic incentives, a manufacturing-friendly business environment, and a large talent pool of manufacturing workers and engineers further driving the decision.”

Detroit’s integrated powertrain – which includes Detroit Engines, Detroit Axles and the new Detroit DT12 Transmission – is part of Daimler Trucks’ Global Excellence Strategy to have uniform production standards and processes worldwide, resulting in the most efficient, highest quality and lowest cost of ownership products in the industry.

“The choice of Redford as the location for full production of the new DT12 automated manual transmission and DD15 proprietary asymmetric turbocharger was obvious – manufacturing of a fully integrated, optimized powertrain belongs together both in manufacturing and ultimately in our products,” said Martin Daum, president and CEO, Daimler Trucks North America. “The Detroit brand has long been synonymous with power and economy, and the addition of these components to our complete optimized powertrain offerings manufactured at the Detroit brand headquarters will add substantial benefit to our customers’ bottom lines.”

Optimized powertrain design and engineering is critical to DTNA’s environmental leadership.  An example of this leadership is evident with DTNA’s GHG14 (Greenhouse Gas 2014) compliance, which was achieved one full year ahead of the mandate for certification by the Environmental Protection Agency (EPA) and the Department of Transportation’s National Highway Traffic Safety Administration (NHTSA).  DTNA’s complete portfolio of model year 2013 on-highway, vocational, and medium duty vehicles and Detroit brand engines are fully compliant with the new GHG14 regulations.  The Detroit brand headquarters in Redford is also a leader in environment stewardship focusing on reducing, re-using and recycling.   The facility has reached its goal of achieving zero waste to landfill and recycled over 20,000 tons of material in 2012.

Ground breaking fuel efficiency results of the new components were exemplified during Freightliner’s Evolution of Efficiency Tour earlier this year.  The new 2014 Cascadia Evolution powered only by the newly designed DetroitDD15 with the new proprietary asymmetric turbocharger and the DT12 automated manual transmission achieved an impressive 10.67 miles per gallon.

The testing was conducted at the Continental Proving Grounds in Uvalde, Texas. There, the truck traveled the 8.5 mile closed-course track for 1,000 miles nonstop at an average speed of 60 mph, with a GCW of 76,000 lbs. Fuel consumption and distance traveled were measured at the end of the demonstration by Automotive Testing and Development Services (ATDS), an independent, third-party auditor using high-accuracy fuel flow meters.

The new Detroit DT12 combines the operational ease of an automatic with the efficiency of a manual transmission, resulting in enhanced fuel economy, vehicle performance and safety.

Available in the Freightliner Cascadia, the DT12 maximizes fuel efficiency for line-haul/long haul operations. Adding to the transmission’s overall economy is its lightweight design, which offers additional payload because of its aluminum housing and single counter shaft.

Advanced technologies include Skip Shift, which automatically skips gears, enabling the transmission to run through lower gears faster to achieve cruising speed sooner; and eCoast, which allows the vehicle to ‘coast’ down grades with the engine operating at idle speeds while preserving vehicle momentum, maximizing fuel efficiency.

Drivers will also appreciate comfort features such as helical gears and geometrical optimized gear-cut for noise reduction; pneumatic clutch and shift actuation for faster gear shifts; and a choice between eco or power-mode configuration. Additional advantages for the driver include a true two-pedal system for ease of operation; and a kick-down feature that improves vehicle acceleration when needed.

The newly designed Detroit DD15 engine features a proprietary asymmetric turbocharger with a next-generation amplified common rail system (ACRS), which not only improves performance and fuel economy, but reduces overall weight and complexity. The variable-speed water pump and optimized oil pump reduce load on the engine, further contributing to the improvements in fuel economy.

Additional engine enhancements include an optimized piston design, which reduces oil consumption through the use of an improved oil control ring; and ACRS, which provides higher injector pressure for improved combustion control while eliminating the pressure regulator, improving overall engine performance. 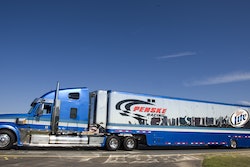 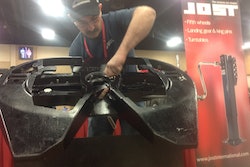 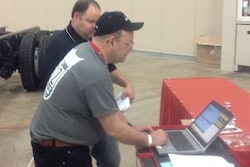 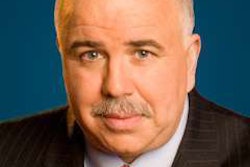