Even with the greater challenges facing turbochargers since being mated with 2002-emissions compliant engines – such as higher operating temperatures and greater boost pressure requirements – these components remain relatively maintenance-free and can last the life of the truck.

“Turbochargers do not normally need any special service,” says Dheyanira Campos, product manager for Cummins Turbo Technologies. “Take care of the engine and its installation, and you automatically take care of the turbocharger.”

“In some form or another, there’s a variable nozzle inside the turbine, which can tell the turbo to act like a small turbo or act like a big turbo, all in the same package,” says Kurt Henderson, technical sales representative, BorgWarner Turbo & Emissions Systems, which uses Variable Turbine Geometry (VTG). “The technology is not necessarily new; it’s been around for a long time, or at least the idea has. But it was never really adopted by manufacturers for just its improved performance. Now that they need it to meet emissions, it’s driving this technology.”

“There are moveable vanes in the turbine housing that direct the flow of exhaust gas into the turbine wheel and, depending on how the vanes are positioned, it affects the velocity of the gas going into the turbine wheel,” says Brian Regnier, Garrett application engineer. “It provides turbo speed and boost control, so at low engine speeds, like pulling away from a stop or moving through traffic, a turbo can act like a much smaller turbo, which gets you to boost pressure faster and helps the driveability. Then when you’re out on the open road and don’t need a lot of boost, the vanes open and it makes the turbo act like a much larger turbo so there is lower exhaust restriction and lower boost.” Garrett’s technology is called Variable Nozzle Turbine (VNT).

On the 2002 engines, the VGT was controlled by a pneumatic actuator on the turbo, Campos says, and a separately mounted pressure control valve. However, to meet 2007 emissions requirements, changes were made.

“The basic VGT concept remained unchanged but the actuation system has changed significantly,” Campos says. “The position of the VGT is now controlled by an electrically driven actuator. This actuator has some intelligence of its own and communicates directly with the ECM [the engine’s electronic control module] over the vehicle’s CAN BUS network.

This system provides more precise control of the VGT position – giving better control of engine emissions levels. It also allows for the actuator to sense problems with the VGT and tell the ECM, so that warning lights can be illuminated and/or the engine’s derate function can be put in place to protect the engine, the turbocharger and the environment.”

The use of electronics to monitor and regulate turbocharger functions is likely to increase as new, stricter emissions requirements are enacted, including the next EPA mandate scheduled for 2010.

Other changes from 2002 turbos to 2007 turbos, though not visible to the naked eye, were more robust designs and materials with greater heat-resistance, says Henderson.

But while the technologies advance and designs change, the maintenance requirements – which are minimal – are largely unchanged.

“There’s not really a set turbocharger service requirement,” says Henderson. “It’s really following the engine manufacturers’ guidelines, and everybody’s going to be a little bit different. We work with the engine manufacturers on every application as to what their limits are – say for oil change intervals, their air cleaner restrictions, those types of things – and we make sure we build a turbo that meets those requirements.”

While there have not been any additional service requirements with turbos designed to help meet the stricter emissions, following engine maintenance guidelines is more critical than ever.

“We have not come up with any new guidelines. I think with the higher power density that the vehicles are seeing and generally all the operating temperatures are going up – anytime you have more boost you have more heat and exhaust as temperatures rise,” says Regnier. “This makes existing maintenance procedures more critical. Strictly adhering to the engine manufacturer’s maintenance guidelines and then using quality filters and oil – as well as engine coolant if the turbo is water cooled – are all very important in ensuring your turbo lives a long life.”

Still, when the truck is in the shop, doing a visual inspection of the turbocharger can help spot issues before failure or identify problems with other systems.

“You are looking for any leaking fluids – water or oil,” says Regnier.

Water leaks occur with water-cooled turbos at the water line connections. Oil leaks can happen from the joint between the compressor housing and center housing, between the turbine housing and center housing, at the compressor inlet or discharge, and at the turbine inlet and discharge. “So oil on a defective turbo can leak just about from anywhere,” Regnier adds.

Other inspection points include making sure the compressor wheel rotates smoothly and is free of damage. If dust or debris makes it past the air filter it can erode the inducer tips of the compressor wheel, and if the foreign material is substantial, it can damage the wheel blades.

Maintaining a clean air filter is also critical to avoid leaks. If a plugged air filter is restricting air flow, it can cause oil leakage from the compressor.

Of course, human error can cause big problems too. “If somebody drops a bolt or something and it ends up in the compressor, that will do a large amount of damage and is usually visible from the compressor inlet.”

Inspecting the turbine wheel and blades can be more difficult as they are not visible without removing the housing. If there is a problem, however, it is usually evident through low boost power or abnormal noise. If a foreign object does invade the turbine and damages one or more blades, it will be knocked out of balance and generally easy to diagnose.

“An unbalanced turbo is going to be noisy and it will wear out the bearings fast. It also can cause the compressor wheel or turbine wheel to rub the housing, and there will be visual evidence of these rubbing their respective housing,” Regnier says. “These turbos spin at 80,000 to 100,000 RPM. At those speeds, just a little bit of imbalance is going to cause a problem over a very short time period.”

With the increasing use of electronics, actuators and sensors are other considerations should a malfunction occur. “It’s not the best environment for electronics,” says Henderson. “Electronic parts definitely can fail on the turbo.”

If the turbocharger is electronically controlled and has a speed sensor, there is both added protection against failure and a potential service item.

“Should there be an inappropriate combination of nozzle gap and engine running condition, the turbocharger maximum speed could be exceeded, leading to a complete turbo failure,” says Campos. “To prevent this from happening, the speed sensor signal is constantly monitored by the ECM and adjustments are made to prevent damage to the turbocharger.

“Of course, the speed sensor itself is another part that could fail or the sensor wire could be accidentally cut in service.”

Campos sys there is a simple test to check the speed sensor for electrical continuity and to measure the output signal. She cautions that if the sensor does need to be replaced, the service manual instructions should be closely followed. There have been instances where the sensor breaks within the turbocharger due to incorrect removal techniques, requiring a replacement turbocharger.

If a turbocharger does need to be replaced, be sure the replacement unit mees all of the required specifications for the engine, operating environment and application.

“Our advice is to pay attention to using the correct part number for a specific application,” says Campos. “Replacement with the wrong turbocharger may lead to premature failure of the new unit and could make your engine illegal in terms of tailpipe emissions.”

Luckily, the chances of needing to replace a turbocharger are slim.

“The turbo is usually the first thing that gets blamed for any engine malfunction,” says Regnier. “A misdiagnosis of a turbo problem is probably the most common failure mode that we see. We’ll get a turbo back and evaluate it for warranty, and the most common occurrence is no fault found.

“Assuming nothing else is affecting it, it’s one of the more reliable pieces on the engine. Our failure targets are in excess of a half-million miles on a heavy-duty truck. It’s not uncommon that at the half-million mark the turbocharger is functioning as if it were new.”

At a glance
While today’s turbochargers are robust and require little if any maintenance, it is recommend to do a quick visual inspection during regular service intervals to ensure proper operation. The three main things to keep an eye out for are: 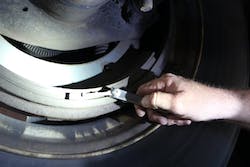 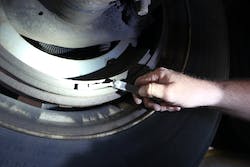