The hazards of tampering – Part V: Best practices for your shop

Hopefully that clarity will ease the concerns of service providers when placed in contact with tampered vehicles.

The EPA would like those numbers to decrease, and Anne Wick, EPA engine and vehicle team leader, says the organization is working to create a service provider tampering guide similar to TMC’s RP for inspection, detection and repairs.

To avoid these penalties, service facilities and their technicians must be educated on how to spot and repair tampering.

In writing its RP, Peter Savage, director of fleet solutions at Clarke Power Services and chairman of TMC’s Emissions Tampering task force, says that’s one of his task force’s main goals. The group wants to create a document that clearly defines heavy-duty tampering, provides examples and offers service providers a best practice for handling a tampered vehicle in their facility.

He says the group wants to ensure no unwitting service provider is saddled with a $37,500 fine.

“We want to build templates for service providers that they can use” in their businesses, Savage says. “We want to offer instruction on what you have to do, and why.”

One key aspect of that instruction is the requirement to bring a vehicle back to specification.

Once a service provider begins maintenance on an emission system and uncovers tampering, it is legally obligated to bring the vehicle back to the specifications required by its model year. If tampering is visible before any service work begins a service provider has the option to refuse service, and must notify the customer as to the reason why.

Greg Arscott, dealer principal and general manager at The Pete Store, says his dealership prefers this practice, and refuses service to any potentially tampered vehicles to avoid the legal implications of a tampered system repair. While tampering isn’t a common problem within The Pete Store customer base, it’s a situation they try to avoid altogether, he says.

Communicating tampering to a customer is not easy but must be done, Savage says.

Savage says his team is up front with customers when put in these positions. It is in the best interests of both sides to bring the vehicle back to specification when tampering is uncovered, but it can be hard for customers to see that long-term positive when handed an expensive, and required, repair order.

“Each time it was a pretty hefty bill. They weren’t excited about it,” he says.

Robert Klepp, lead attorney for the EPA, adds that there’s no end of a vehicle’s “useful life” where tampering becomes acceptable. Illegal alterations to a 1989 tractor are punished the same as changes to a 2011 unit.

This makes the aftermarket especially susceptible to tampering. Most fleets and new vehicle owners aren’t willing to void a warranty, but a second- or third-generation owner might be think altering a 10-year-old truck is OK.

Savage says that’s not the case, and notes service providers must be strong when communicating that to their customers.

“If we fix [the tampering] and then they do it again, we are right back in the same situation next time they come in,” he says.

Spencer Dell, on-highway marketing communications representative at Cummins, says Cummins has a standard protocol in place to help guide its dealers through these situations.

With more advanced emission systems entering the marketplace, the EPA says industry education is more critical than ever.

The organization acknowledges tampering isn’t likely to be eradicated, but says there’s hope in minimizing the total number of cases.

“Diesel engine exhaust is very harmful. The particulates in it affect public health,” says Wick. “The less of it released into the air the better.” 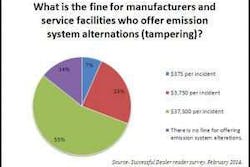 The hazards of tampering – Part IV: Punishments for tampering