A tax in transition? A new coalition is fighting to reduce trucking’s federal excise tax requirements 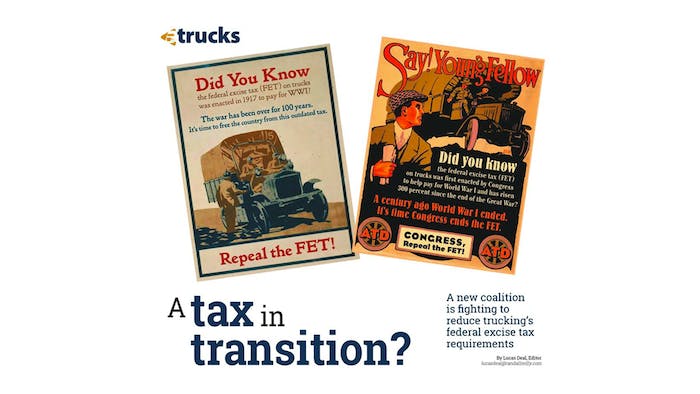 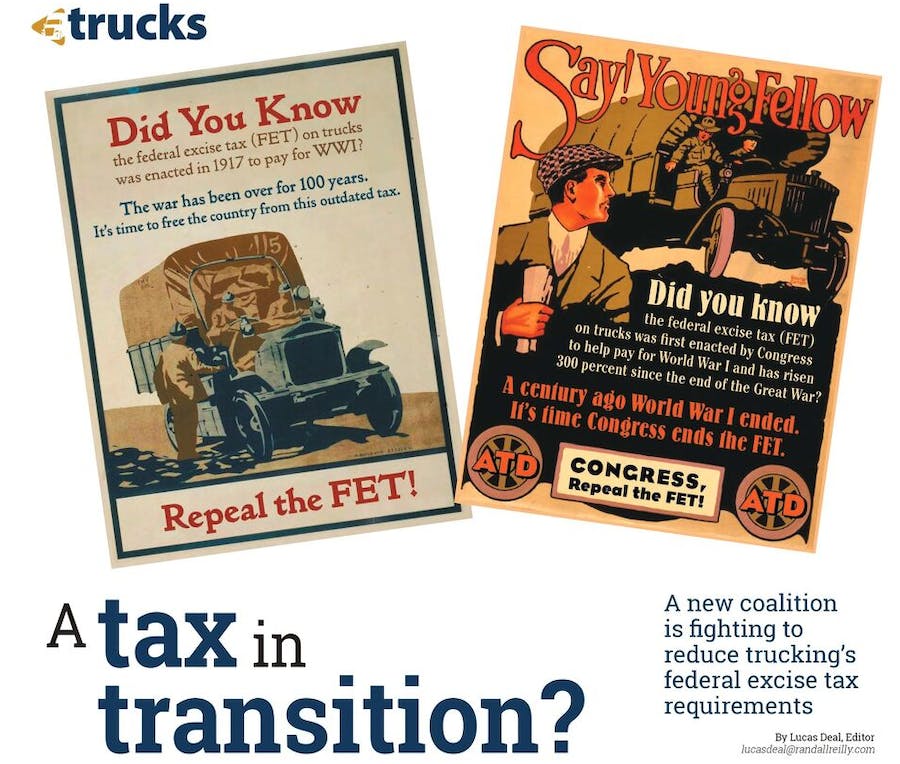 Federal excise tax (FET) has been a burden on the dealer market for decades. The American Truck Dealers (ATD), after years of fighting the tax alone, recently introduced the Modernize the Truck Fleet (MTF) coalition, a trade association alliance spearheaded by the dealer group to strengthen its fight for the repeal of FET.

The coalition has revolutionized the FET debate, creating a pathway toward resolution for which America’s truck dealers have long searched. But will the dealer market truly be able to rid itself of FET? Those involved believe a repeal is possible but is contingent on two factors: finding an adequate replacement for FET’s revenue stream and ensuring any FET repeal/replacement measures are included within a larger infrastructure bill.

Pull off those tasks and those within the MTF coalition believe the dealer market’s long FET nightmare finally could be over.

What is FET, and why is it such a pain point?

The trucking industry has been burdened by FET for more than a century. Introduced as a temporary revenue stream to fund the U.S. military during World War I in 1917, ATD says the tax code supporting FET has been altered and expanded many times.

The most significant change to that tax code came in 1982, when the government shifted the tax to the first retail sale of an asset after decades of being assessed at the wholesale level. This change, which moved the responsibility of collecting the tax from OEMs to their franchisees, transformed FET from a simple pass-through expense for dealers to a complicated mathematical formula coupled with rigorous payment requirements and severe penalties for non-compliance. It’s been that way ever since.

“It’s a difficult tax to administer and its one of those things where if you get it wrong it can be a disaster,” says ATD Chairwoman Jodie Teuton, vice president, Kenworth of Louisiana, who introduced the MTF coalition at the 2019 ATD Convention in January.

As it exists today under Internal Revenue Code (IRC) Section 4051, a 12 percent FET is imposed on the first retail sale of a truck chassis, body and trailer “of the kind chiefly used for highway transportation in combination with a trailer or semitrailer.”

Yet not every component installed on a new asset is beholden to the tax. Tires, for example, are exempt because their excise tax is paid during acquisition by the OEM, while other components may be taxable in one specification or duty cycle but not another.

“There are a lot of little nuances in the law,” says Steve Bassett, president, General Truck Sales, and ATD vice chair. “Such as ‘Is it taxable if it’s going to be a farm truck that won’t go on the road much?’”

He adds, “It puts us in a position where we have to determine the intent of the law and are subject to penalties if we get that wrong.”

Why should FET be repealed?

Dealers say their frustration with calculating and paying the tax is not their primary reason for fighting it. FET is counterproductive to one of the government and trucking industry’s primary shared goals: to reduce emissions and improve fuel economy for America’s medium- and heavy-duty truck population. 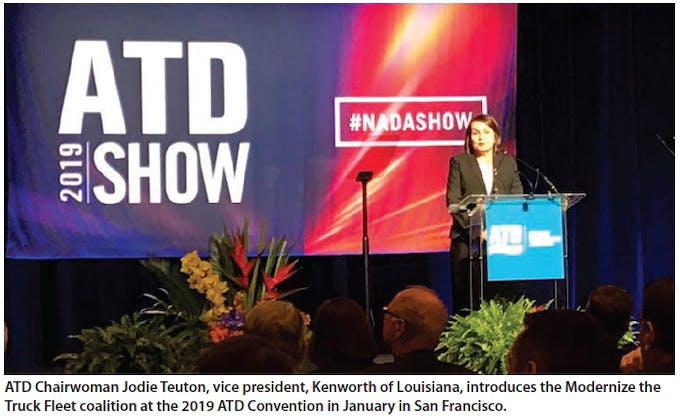 “To me, this is an issue of fairness,” says Teuton. “We’re asking these fleets to commit to cleaner, more fuel-efficient trucks but charging them more to buy them.”

Bassett adds, “I think we all want cleaner, safer and more efficient trucks on the road and FET hinders our ability to do that. It doesn’t make a lot of sense.”

As EMA President Jed Mandel said when his group joined the coalition, “FET increases the cost of purchasing new, modern heavy-duty trucks, and as such we endorse repealing the FET to lower barriers to deploying the cleanest and safest trucks available. We are enthused to help lead this important effort to modernize the truck fleet.”

“If we figure an average price of $125,000 for a new Class 8 unit, that’s $15,000 right up front. That’s a major impediment for [our members],” he says. And while Jacoby says some private carriers may be willing to extend trade cycles to reduce new vehicle costs, that’s not really an option for lease and rental providers.

“Everyone who wants a lease wants a brand new vehicle,” he says.

What are the chances of a repeal?

With the creation of the MTF coalition, the ATD believes the trucking industry has taken an important step forward toward turning an FET repeal into reality. ATD says the coalition offers a unified front to send to Washington to lobby for a change to the antiquated tax.

“I think there are open minds on both sides of the aisle in Washington,” says Teuton. “Some legislators have some familiarity with FET but they rarely know exactly how it works. Once you explain it, they usually understand why we’re doing what we’re doing.”

Parker says, “The pay-for replacement has always been our stumbling block in the past. That’s what excites us about the coalition. We have some really big hitters on there. Hopefully we can work together to find a solution.”

He says one potential resolution that’s found support from different members of the coalition is a diesel fuel consumption tax, which would still generate revenue from vehicle owners but would spread their financial burden over the life of their asset rather than as an upfront expense. A consumption tax also would help promote the acceptance of the new safety and fuel-efficiency technologies the EPA and its partners are pushing within the industry, Parker says.

“If we are truly sincere about addressing global warming and climate change, why wouldn’t we want to get cleaner and safer trucks on the road?” adds Bassett.

There are other fuel-based solutions on the table, too. MTF members say they want to be open to any potential replacement methods so as to bring the best options to legislators.

“We want to be flexible and accommodating. We don’t want to say, ‘This is what it has to be’ and be set in stone,” says Teuton.

But bringing a solution to the capital hardly assures change. ATD garnered Republican and Democratic support for FET repeal bills in both chambers last session only to see the bills die with the new Congress in January. The organization may push to reintroduce those bills but would prefer to include a repeal-and-replace strategy as part of a larger infrastructure bill that’s been teased around Washington for years.

Jacoby believes bipartisan support for such a grand bill still exists if both parties can set down their spears long enough to write the legislation. “I think there is a common feeling in town of ‘We have to do something.’ Historically, transportation and agri-culture are the two issues that are not as contentious,” he says.

Yet the unpredictably of politics means there’s no timeline MTF can follow in developing a repeal-and-replace proposal. Parker believes it is best the coalition work quickly to create a solution it can propose any time infrastructure discussions begin on Capitol Hill.

And to do that, ATD urges its dealers to get involved — both with the coalition and their local legislators. Teuton assures her fellow dealers that the reward will be worth the investment.

“I’m not going to say if [we repeal FET], I’m going to say when,” she says. “When we win this battle it’s going to be good for every one of us.” 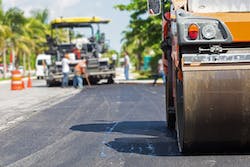 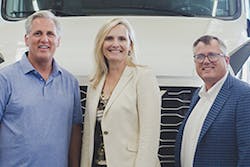 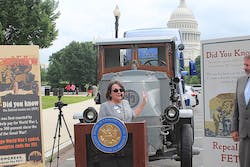 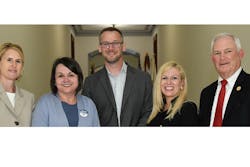