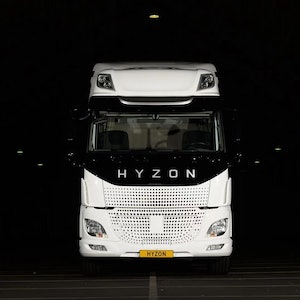 Hyzon, a leading global manufacturer of hydrogen commercial vehicles, announced it will sign a memorandum of understanding to supply the truck, used in construction operations, to a heavy lift, transport and rigging group.

“This technological development will demonstrate that hydrogen fuel cell vehicles can replace diesel for even the most heavy-duty needs,” says Hyzon CEO Craig Knight. The fully loaded trucks, 154 tons by U.S. measurement, are considered the industry’s heaviest, and are expected to provide 480 kilowatts of power, he adds.

The truck agreement comes as Hyzon readies for a public listing on Nasdaq via a business combination with Decarbonization Plus Acquisition Corporation.

Additional interest in Hyzon’s heavy trucks has been expressed by current and potential customers in Europe and Australia, such as mining companies and companies in other industries which require high-performance vehicles for use in rugged terrain, over long distances, and in rigorous industrial activities.