A bountiful harvest: The sales potential of the agriculture industry in the aftermarket

The following comes from the August 2017 issue of Truck Parts & Service. To read a digital version of the magazine, please click the image below.

Finding and capitalizing on underserved markets has long been a blue print for aftermarket success. Whether it be discovering an unfamiliar niche, focusing on an underrepresented product category or simply better serving isolated customers, the independent aftermarket has long thrived on its versatility.

Never has that been more valuable than the present. With on-highway carriers continuing to grow more specialized, advanced and demanding in their needs, aftermarket distributors are being forced to work even harder to find customers and market segments that continue to value flexibility and adapt-ability with loyalty and partnership.

For distributors with access, one area that remains highly profitable is the agricultural industry.

According to data compiled by Randall Reilly’s RigDig Business Intelligence, more than 40 percent of the 1.1 million active fleets in the United States in 2015 were private carriers operating fewer than 10 trucks. While a significant number of those 408,702 fleets identify as owner-operators or small businesses, the heartland is still ripe with commercial trucks. For the farmers and ranchers who own them, finding an aftermarket partner to rely on is nearly as important as good weather and commodities prices.

“We’ve found the [agricultural] market to be a huge advantage for us in recent years,” says Scott Goostree, vice president at Wichita, Kan.-based Truck Parts & Equipment. “It’s such a complex market, and so broad in scope. Not everyone gets into it. But we’ve found by making a commitment to it that we’ve really been able to succeed.”

For a distributor considering a plunge into the ag world, Goostree’s reference to its scope is not to be overlooked. The variety of equipment found in agricultural fleets is without comparison. It’s not just all-makes; in the farming community, there’s no tell-ing how new, old or unique a piece of equipment can be.

Like their contemporaries in the ‘private carrier, fewer than 10 trucks’ demographic, agricultural customers rarely buy trucks new, instead choosing to purchase equipment as second or third owners with the hopes of keeping them for a long time.

But unlike those contemporaries who buy used but intend to drive every day, most agricultural customers use their equipment sporadically, putting in a lot of miles during peak seasons and very little elsewhere. These gaps allow not only opportunities for regular maintenance, but because of their lower overall mileage totals, can lead to customers hanging on to operational vehicles for decades or more.

“As long as [the trucks] keep running, they’ll keep them for a long, long time,” says Dave Engstrom, president at Mutual Wheel, which has 11 locations in the farm-heavy states of Illinois and Iowa.

Agricultural customers also use their equipment in different duty cycles. What the ag market lacks in dry vans, reefers and fl at beds it makes up for with grain trailers, livestock haulers and medium-duty specialty straight trucks. All of which require specific componentry and service.

It’s a lot to keep up with, Goostree acknowledges, but because so many don’t, distributors who do commit to the market can stake out a reputation as supplier to rely on.

The best way Truck Parts & Equipment has found to do so is through its inventory.

When on-boarding a new customer, Goostree says his sales team asks for a vehicle list and any historical parts purchasing data. (As self-employed entrepreneurs, some farmers keep these receipts for taxes purposes.) Goostree says Truck Parts & Equipment will alter its inventory based on data provided to proactively stock what a customer is likely to need. In cases where future needs don’t match expectations, Truck Parts & Equipment will then evaluate its data with the customer’s purchase his-tory and update its stocking accordingly.

“I know if an inventory expert came in here they’d probably want to cut a chunk of our inventory,” he says. “But when I was a sales guy, customers would always tell me ‘The reason I call you is because I know you’re most likely to have what I need.’” 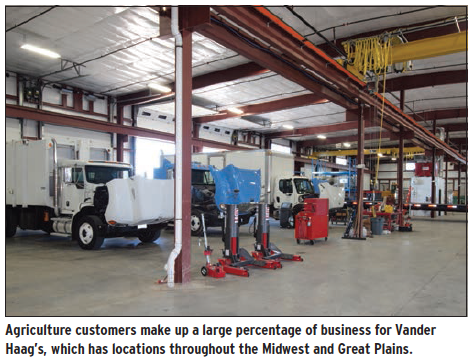 John Vander Haag, president at Vander Haag’s, says his company builds its inventory with the same goal in mind, focusing not just on breadth but also depth of its product lines at its locations in Iowa, South Dakota, Missouri and Indiana.

“We’ve found a blended inventory has really worked well for us, so we try to supplement our new inventory with rebuilt and recycled parts to give the customer options,” says Vander Haag.

Active parts tracking allows the distributor to identify higher-volume ag-specific parts and stock accordingly. Vander Haag mentions trailer parts and some older truck components as categories that skew toward the ag market, but says most of Vander Haag’s rural inventory mirrors what it keeps in its more urban stores.

“We’re always watching what’s turn-ing and stocking to that. There may be a few differences between our Des Moines and Kansas City stores compared to our Sioux Falls and Spencer locations, but it’s not a huge difference.”

An inventory expanded for agricultural customers also should be promoted as such. Some components used on heavy-duty trucks can also be installed on farm equipment.

“A lot of these guys are putting LED lighting on their trucks and equipment so they can work late in the fall. We’re stocking a lot more of those lines because of that,” he says.

Additionally, at Butler Machinery Company, which serves the truck, heavy equipment, construction and ag markets in the Dakotas and Nebraska, Truck Parts Specialist Jeremy Oistad says his company uses its business systems to communicate parts leads to its other divisions.

“We have an alert that we use” to notify departments if a customer has requests for their products, he says. “It allows us to follow up with them. We don’t want anyone to fall through the cracks.”

Serving the agribusiness industry also requires an understanding of its seasonality. When farmers are harvesting and ranchers are moving livestock, one minute of downtime is too much. Gaining and maintaining ag customers during those periods is all about access.

That means not just having the part, but also being open or providing delivery to get it to the customer fast, Oistad says.

“When these guys are in harvest their window [to work] is so small. Days and hours are crucial to them. They have to be working,” he says. “And most of them don’t have a backup truck. There is no margin for error if it breaks down.”

“We’ve realized the opportunity there. We know they can’t be down, and if we can be there for them and take care of them, we know how much that matters,” he says.

“When we’re open earlier in the morning those are the types of customers we see a lot. In the fall, we’ll have guys in our stores at 6:30 or 7 a.m. pretty regularly.”

Goostree says Truck Parts & Equipment dials up its delivery, sending parts out across the plains for same day and next-day repairs. It’s also had success partnering with rural repair shops, who provide overnight service to get agricultural trucks and equipment back up and running by sunrise. 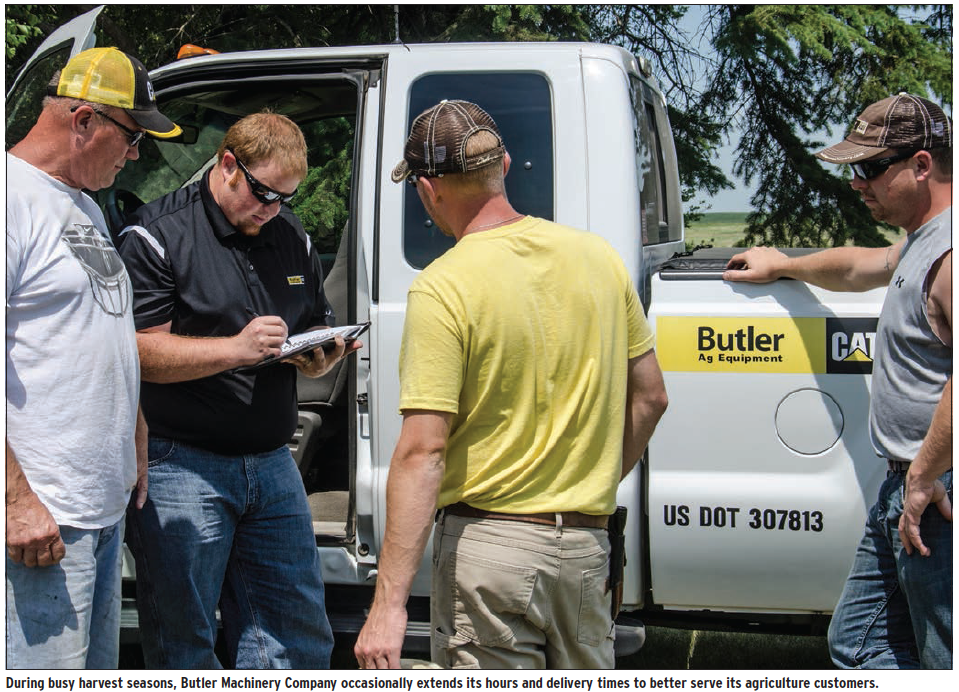 Service is another area where ag customers can be unique. As immediate as their needs are when harvest is in session, their trucks also can sit for weeks and months at a time. Vander Haag says his company has started running parts and service specials during those slow periods to motivate customers into preventive maintenance, and reduce their downtime risks when business picks up.

“We try to get them in now before the big pressure is on,” he says.

It’s moves like that distributors say can turn a supplier-distributor relation-ship into a partnership.

“We want to do anything we can do to be a one-stop shop for them. That’s our ultimate goal,” Oistad says. “The closer we can tie them to us the better that is for both of us.”

Vander Haag agrees. “Ag is the pre-dominant industry in our area. We’ve built our relationships over time and we work hard to maintain them.”

But it’s important to acknowledge that partnerships are built on trust, and loyalty goes both ways.

Goostree believes Truck Parts & Equipment’s agricultural customers “like to deal with people who truly do care about them and their businesses,” and says the distributor works every day to provide the parts and service necessary to meet that expectation.

“We have to be there for them.” 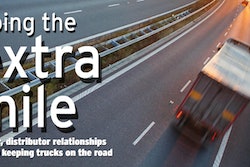 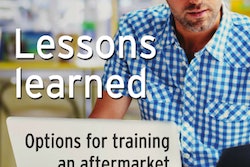