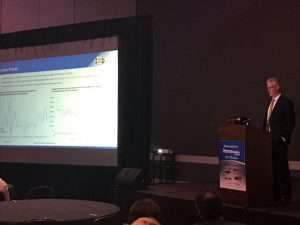 “Who thinks the used truck market is better than it was this time a year ago,” Chris Visser asked a group of dealership owners, executives and managers Thursday during the Successful Dealer Summit at the Great American Trucking Show in Dallas.

Visser, JD Power senior analyst and product manager, commercial valuation services, looked around the room as about half the key personnel raised their hands.

Visser said he thought it would be a mixed reaction as he gave a used truck market update and outlook presentation, hitting on a variety of topics ranging from auction sales to day-cab versus sleeper sales.

“The auction market has been wagging its tail since mid-2015,” Visser opened with.

He said that pricing on the retail side has leveled out, opening a new market to some owners who had been waiting to make new purchases.

“We are about 6-8 percent down from last year on pricing,” Visser said.

He also made comparisons between several different truck model types.

The supply of day-cabs has been increasing over the past 18 months.

“I expect them to continue to perform very well even though there are more of them in the market,” he said.

Typical construction sales are eight years old and have about 270,000 miles on them.

Visser said construction sales have dropped a good bit in 2017 as compared to the past two years.

Visser also hit on current trends as it relates to 6x2s, wide-based wheels, automatic transmissions and those using natural gas.