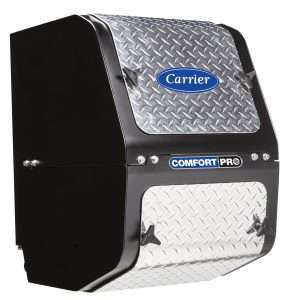 With the integrated model, Carrier Transicold says tractor engine warming is provided via APU coolant exchange. The stand-alone model provides the same capabilities as the integrated APU but the tractor and APU coolant systems are independent, with the ComfortPro APU’s generator powering the tractor’s block heater to warm the engine. When plugged in to a 110/120-volt source, the ComfortPro APU’s shore power option enables functionality without running the APU’s diesel engine.