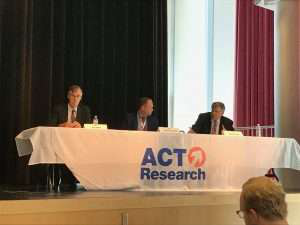 The best stretch in truck order history is going to continue. Through 2018 at least. The big question now, says Kenny Vieth, president and senior analyst at ACT Research, is will the current hot streak make it to 2020? Vieth says ACT anticipates the boom will finally subside next fall but, in the meantime, dealers and their fleet customers should get used to waiting for new trucks. Class 8 orders today are coming in faster than OEM facilities can build. Trucking’s backlog is growing.

“The backlog to build ratio right now is about nine months,” Vieth said Tuesday at ACT Research’s biannual seminar in Columbus, Ind. “There are only 9,200 open build slots in the fourth quarter; and only 24,500 build slots in the first quarter in 2019.”

Vieth says more than 150,000 Class 8 trucks were built in the first and second quarters this year and more than 160,000 are expected before New Year’s Day. And Vieth says that number may be a bit on the low side. Truck OEMs are preparing for a build rate of 1,330 trucks per day in Q4 but Vieth says ACT’s estimate puts the market’s need at closer to 1,400 trucks. The industry has surpassed that rate for short periods this year, and Vieth says the current difference between orders and OEM build plan is “as large a gap as we’ve ever seen.”

Vieth attributes the current boom to a strong American economy, last year’s tax bill and the driver shortage, among others. Regarding drivers, Vieth says because fleets are unable to significantly increase entry pay without impacting their prices to their customers, new vehicles are proving a useful recruiting tool. But on that note, Vieth says the trucking industry remains challenged by tight labor markets in its efforts to fill driver openings. He says the market has added nearly 30,000 drivers since January 2017, which helps, but falls far below the 100,000 new drivers needed in 2017 and 2018.

“We’re not working off the shortfall of drivers, we’re still adding to the shortfall,” he says, adding that “if you think it’s hard to find people now, it does not get better from here.”

Back in the truck order world, Vieth says ACT Research expects the market to cool next fall and says “significant headwinds,” such as lower GDP projections and possible sectorial recessions, should level the market at a lower position in 2020 with a slight recovery to follow in 2021 and 2022.

“We don’t think we’ll make it through 2019 before the roll off [of production rates],” Vieth says.

The three economists remain bullish on the U.S. economy, stating while a recession risk exists, it remains small and seems unlikely in the remainder of 2018 and 2019. One reason for the group’s optimism — or lack of pessimism — comes from the economy’s current growth rate. Kahan says the current U.S. growth period of 110-plus months features the mildest GDP growth rate since World War II. Previous growth periods posted GDP averages of 5 percent or more; the current period sits at 2.1 percent. Manufacturing growth rates are even lower.

Meil adds this stability has enabled the government to make measured, reasonable policy decisions and avoided the riskier boom and bust decisions made during prior expansion periods. He pegs the likelihood of an upcoming recession at 20 percent but believes it is much more likely 2016’s lull was a “pause that refreshes” the economy (65 percent); or possibly will be looked back as a mini-recession that kick started another growth period (15 percent).