The used Class 8 auction and retail markets experienced opposite changes to volume and pricing during the first full month of the economic shutdown, J.D. Power reported Monday in its May 2020 Commercial Truck Guidelines industry report.

J.D. Power notes sales volume in the auction space was surprisingly steady in April, considering the circumstances, though price fell almost entirely across the board. J.D. Power adds the slip in price was to be expected. 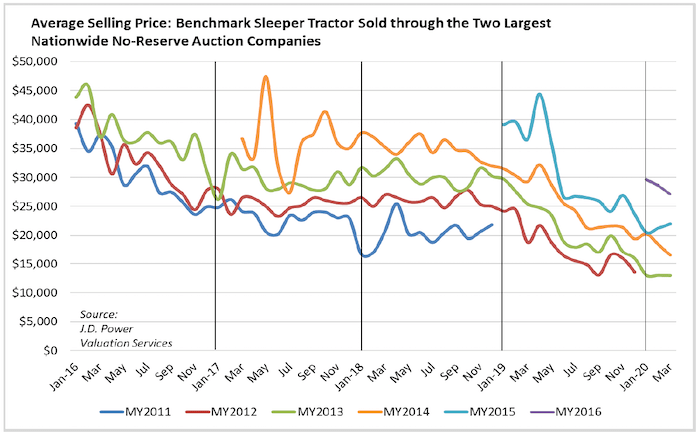 J.D. Power says April sales among its 4- to 6-year-old benchmark model were down for 7.7 percent compared to March. Price also was down 28.6 percent in the first four months of 2020 compared to the same period last year. Depreciation, however, remains steady at 2.2 percent, “a healthy figure given the economic situation,” the company says.

“With the economy very gradually opening back up, we could now be at or near the trough for pricing. We could see some uptick in volume in upcoming weeks, but demand will still be limited mainly to replacement iron,” the company adds.

Business was substantially stronger in the retail space, where volumes was lower but pricing was strong. 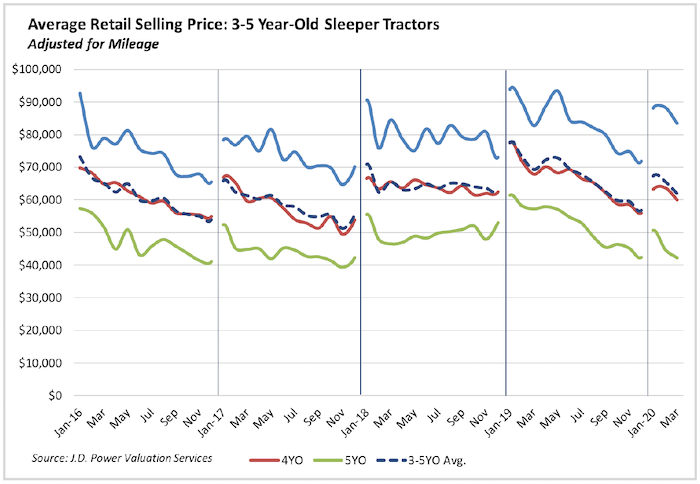 “We expected to see pricing fall more notably in April, following the auction channel. This didn’t happen, suggesting the market may have found its bottom,” J.D. Power states.

And the strong sales were not limited to any specific model year. Among 2- to 5-year-old tractors, April’s average pricing was as follows:

Month-over-month, J.D. Power states late-model trucks brought 0.3 percent more money, though used sales in the first four months of 2020 were 12.2 percent lower on average compared to the same period last year. Additionally, depreciation in 2020 is averaging 2.2 percent per month, an improvement from last month’s 2.7 percent, and a better result than we expected, the company states.

The market’s drop in volume was seen in sales per rooftop; dealers averaged 3.4 sales per rooftop in April, down 0.3 trucks from last month and down 0.9 units from April 2019, J.D. Power says.

“Looking forward, we still see used truck pricing recovering roughly in step with the gradual re-opening of the economy,” J.D. Power reports. “This means the auction market should see some firming in the summer, followed by mild to moderate increases in the fall and into 2021 (with some pauses here and there, particularly in October and November).”

Sales data in the medium-duty market was varied across vehicles, J.D. Power reports.

“We were somewhat encouraged by pricing data, particularly for light-GVW conventionals, suggesting there’s still demand among the contractors, delivery operations, small business owners, and other segments that buy trucks in this category,” the company says.

But J.D. Power also notes it had expected the other segments to perform better.

“We had predicted medium-duty trucks to weather this storm fairly well, since local deliveries and construction activity have not been curtailed appreciably. With that in mind, we’ll see if volume improves next month. As the country gradually opens back up, there’s more positive than negative pressure in the marketplace.”

Finally, J.D. Power notes “cautious optimism is in the air” as the U.S. slowly reopens.

“There will be no shortage of used trucks at least through summer, but the worst of the depreciation should be behind us. We haven’t appreciably changed our residual value forecasts for Q2-Q4 of 2021, and we still see pricing returning close to our existing trend by that time,” the company states. 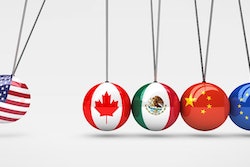 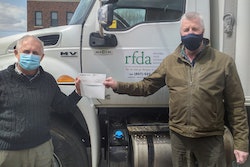 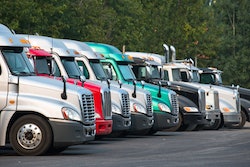