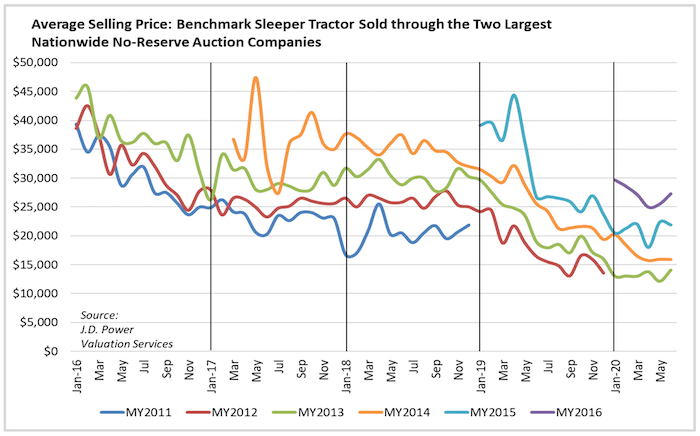 Volume rose across the board in June in the heavy-duty retail and auction used truck spaces as well as the medium-duty used truck market, J.D. Power reported Thursday in its July 2020 Commercial Truck Guidelines industry report.

J.D. Power says volume levels in the auction market last month were the highest the company has seen in its benchmark model in nearly five years. Pricing was generally down due to an oversupply identical truck packages, but J.D. Power states used truck with below average miles continue to perform well.

Compared month over month, J.D. Power says 4- to 6-year-old trucks were down 4.3 percent. Compared to the first six months of last year, used truck auction pricing is down 23.9 percent, though depreciation this year is still averaging a very low 0.9 percent per month, the company says.

“June’s results essentially split the difference between April’s drop and May’s increase, which explains the unchanged depreciation average. Freight data for dry van loads has fully recovered, and reefer metrics are not far behind. Other segments continue to improve. There’s no shortage of supply, but demand continues to lift off the bottom,” the company says. 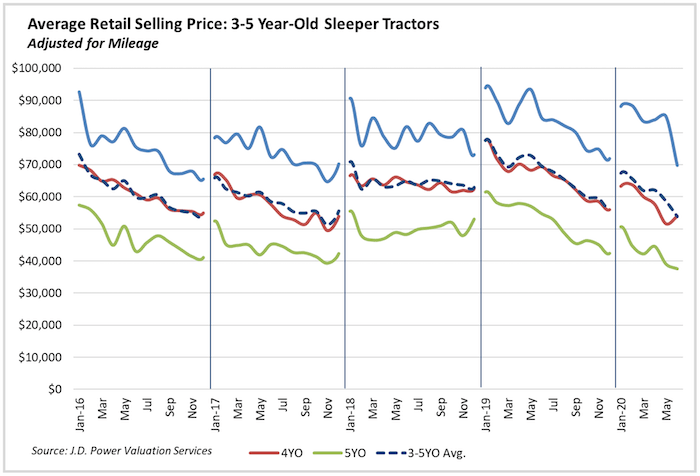 In the large 2- to 5-year-old truck cohort, J.D. Power says average pricing in June was as follows:

Compared to May, J.D. Power says late-model trucks brought 8.5 percent less money in June. Comparing the first six months of this year to last year, the company says pricing has averaged 15.1 percent lower than the same period of 2019. Depreciation in 2020 is averaging 3.1 percent per month, an increase from last month, and moderately above the historic range.

“Late-model sleepers that have accumulated less than 100,000 miles per year are bringing relatively strong money, especially those with under 300,000 miles,” the company says. “The gap between high-volume models and lower-volume models is increasing.”

But what dealers may be losing on specific trucks they are making up in volume. J.D. Power reports dealers retailed an average of 4.5 trucks per rooftop in June, 0.6 truck higher than May and 0.7 truck higher than last June.

“This increase is encouraging, and indicates somewhat better demand commensurate with the economic re-opening,” the company says.

Overall, J.D. Power states the last month’s strong volume was “probably a combination of pent-up demand from the previous two months combined with optimism about the slow-but-sure reopening of the economy. As predicted, reopening gathering places resulted in spikes in virus infections and attendant regional pullbacks. However, the genie has been let out of the bottle, and it is extremely unlikely we will see a return to large-scale shutdowns.”

The company adds its previous assessment of market factors impacting the economy at large and trucking industry remain in place. “We still have a lot to work through before economic conditions will look anything close to normal. The trucking industry in general will continue to perform better than most, and we still see more positive than negative pressure on used truck values.”