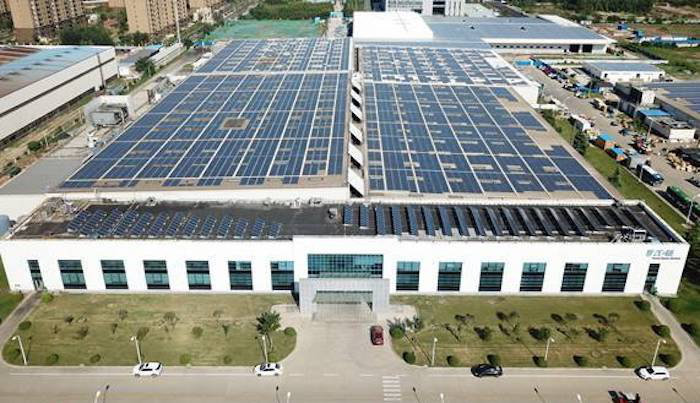 To reduce water consumption and mitigate pollutants, Eaton’s Vehicle Group is installing wastewater systems featuring ultrafiltration and reverse osmosis technologies for the treatment of industrial process water at several of its facilities. The systems are designed to treat and reuse water for industrial purposes.

In addition, some facilities are managing their stormwater by increasing the permeability of their property, decreasing runoff rates to reduce erosion, and adding native plantings that don’t require watering.

Employees at Vehicle Group’s Valinhos, Brazil, facility initiated an innovative water conservation system that treats water used at the plant with physicochemical and biological processes. The treated water is then reused in restrooms ​and for cleaning. In the first month of operation the system saved 40 cubic meters of water and is projected to increase to 129 cubic meters of water savings per month as the process is refined.

Multiple Vehicle Group sites also have made progress in diverting grinding swarf waste from landfills. Swarf, a byproduct generated during metal-cutting processes when fluids such as oils, coolants and water are mixed with fine particles of metal and filtration media, is one of the most difficult waste streams to recycle. Through vendor partnerships, the Vehicle Group deployed a mobile centrifuge process that separates the materials, making it possible to reuse the fluid during manufacturing processes and recycle the metal particles.

New lighting systems composed entirely of light-emitting diodes (LEDs), which utilize 70 percent less energy than traditional lighting technologies, are being added at Eaton’s Vehicle Group facilities. The LEDs are activated by motion sensors that detect when someone enters or exits an area and a wireless control system that manages every lighting fixture and tracks the status of each. The Vehicle Group’s Tczew, Poland, facility recently installed such a system and has already realized a large reduction in energy consumption resulting in savings of hundreds of dollars in monthly costs.

Many of the electrical systems within a facility are sourced from Eaton’s Electrical Sector, a global leader in power distribution, power quality, industrial automation and power control product and service solutions.

In addition to leveraging LEDs, some Vehicle Group sites are taking steps to produce their own power by installing massive solar panels on the roof. A 10,000-square-meter solar panel array was recently installed on the rooftop of the Vehicle Group’s Wuxi, China, facility, and it’s expected to generate 769 MWh of electrical power annually. Electricity generated will be used for manufacturing at the plant, reducing greenhouse gases by about 588 tons per year. Additionally, solar roofs were installed in the Nashik and Ranjangaon, India, plants, reducing more than a 1,000 tons of carbon dioxide emissions annually.

Constructed from the ground up with an environmental focus

The manufacturing facility in Aguascalientes, Mexico, was constructed with a number of new environmentally focused features, including motorized windows for natural ventilation, reflective roofs for low solar gain and a daylight harvesting system that uses natural light to minimize energy consumption.

The site features a lighting system composed entirely of LEDs, a cooling system with motorized windows for natural ventilation and a reflective roof to reduce heat detention, while dryers and a mist eliminator ensure quality air flows through the plant.

Driving the movement toward a circular economy

Eaton is joining the global movement to mitigate climate change, which includes science-based targets for cutting carbon emissions from the company’s operations by at least 50 percent by 2030, positioning Eaton to achieve carbon neutrality.

Eaton’s eMobility business is contributing to a carbon-free future by installing vehicle charging ports for electrified vehicles at all its global sites, which encourages employees to choose zero-emission cars for their workplace commute.

In an effort to reduce waste, Eaton also is committed to achieving zero waste-to-landfill (ZWTL) status at 100 percent of its manufacturing facilities by 2030, and the Vehicle Group is doing its part to contribute to this important effort. Eaton’s Vehicle Group continues to implement ZWTL initiatives at its sites around the world. In 2020, its Hastings, Nebraska, facility was added to its list of manufacturing sites that are zero waste-to-landfill certified, bringing the global Vehicle Group sites that are ZWTL compliant to 74 percent.

“We are extremely proud of how we’ve come together to upgrade our manufacturing facilities in a way that improves energy efficiency, minimizes the impact on the environment, and brings us closer to a carbon-free future,” says João Faria, president, Eaton’s Vehicle Group. “Our commitment to sustainability is part of our core mission to improve the quality of life and the environment for those who count on us today and in the decades to come.”

To read more about Eaton’s commitment to sustainability, CLICK HERE.