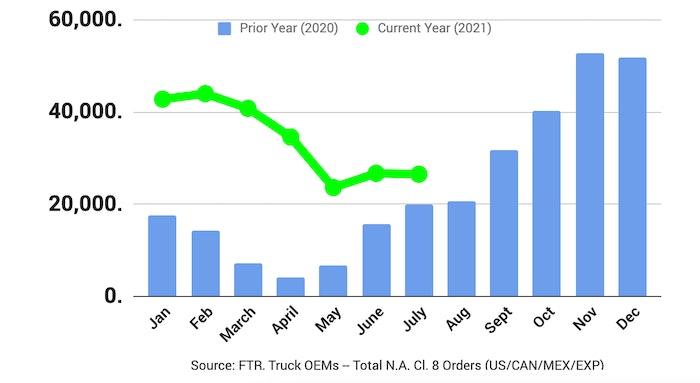 While order rates remain below the backlog-filling volumes of Q4 and Q1, the 3- and 6-month seasonally-adjusted annualized rates remain well above the industry’s ability to produce, says Kenny Vieth, ACT Research president and Senior analyst.

FTR reports preliminary Class 8 orders for July were down 1 percent month over month at 26,500 units. Orders were +25 percent year over year, with Class 8 orders now totaling 394,000 units for the previous 12 months.

Veith says, “In 2018, there was an explosion of orders across the industry, as dealers raced to get their places in rapidly growing out-year backlog queues. Underlying drivers of commercial vehicle demand are considerably hotter than they were three summers back, with 6-plus percent GDP growth, capacity constraints across multiple shipping modes, at/near-record trucking freight rates, surging carrier profits and record used equipment valuations providing deep support for Class 8 demand.

“While conditions are in place to sell-out 2022 backlogs in a very short time horizon, the industry appears to be approaching order distribution much differently this year,” he says.

FTR reports the July order total is essentially equal with June, as the industry is in a holding pattern at the bottom of this order cycle. Ordering for 2022 has commenced at most OEMs but remains delayed some due to cost uncertainty and the possibility of enduring supply chain bottlenecks.

“July ordering was similar to June in that OEMs took a limited number of orders for delivery in 2022. Fleets need a significant number of new trucks right now and they perceive this need will continue throughout next year. However, OEMs are having difficulty establishing reasonable 2022 pricing, with commodity and other costs elevated. It is uncertain if current higher production costs are transitory or will persist into 2022,” says Don Ake, FTR vice president of commercial vehicles.

“Also complicating the situation is that shortages of semiconductors have limited Class 8 production. It is estimated that supply of trucks is falling approximately 25 percent behind market demand. We are running out of time for OEMs to catch up. Most of the unproduced orders will roll into the first quarter of 2022. If those months are already booked solid, it creates even more headaches for the industry,” Ake says.

“Things won’t approach any degree of normalcy for months. Until semiconductors begin flowing into the OEMs in sufficient qualities, we will be playing catch up,” he adds.

Regarding the medium-duty market, Vieth says, “With the consumer economy remaining buoyant, July’s Classes 5-7 net orders accelerated on both an actual and seasonally adjusted basis. July’s medium-duty net orders fell just short of a top-five all-time finish, coming in at a respectable sixth best ever.”

Vieth adds, “North America Classes 5-8 orders in July continued in rangebound fashion, falling in the middle of order activity since April: Preliminary inputs indicate net orders in July were 56,000 units, compared with a lower-bound 48,900 in May and an upper-bound 62,300 in April. While this July’s volume is middling compared to the order standards set over the past year, it handily beats last July’s COVID-impacted volume at +47%.”

Complete industry data for July, including final order numbers, will be published by ACT Research in mid-August. Final data will be available from FTR later in the month as part of its North American Commercial Truck & Trailer Outlook service.