Stay safe and beat the breakdown: Keep ADAS and other truck systems in top shape during winter

While there are several important steps to take to prepare a truck for winter, the latest addition to that critical to-do list is arguably one of the most important: Advanced Driver Assistance System (ADAS) maintenance.

The list of ADAS features on newer Class 8 trucks is long and growing with automatic braking, lane departure alerts and automatic cruise control topping the list of favorites.

However, if ADAS components are not properly maintained during freezing, snow-filled winters, that can mean losing that all-important edge on safety.

“These safety components require clean, unobstructed, and precise mounting to operate effectively,” Puff continued. “In the winter, these components can get packed with dirt, snow, and ice making the system less effective or causing it not to work at all. Drivers should regularly inspect the cameras and radars to ensure they are unobstructed and clean.”

“If this happens the driver will get a warning on the dash letting them know the system is temporarily not available,” Brodie said. “It is acceptable to continue driving when this occurs, but drivers should clear the blockage and in some cases may need to cycle the ignition off for a few minutes once they are out of the weather that caused the blockage.”

Automated braking may not do anyone much good if braking components aren’t prepped for winter. First up is the air system.

“Moisture in the air system is detrimental and reduces the ability of the vehicle to stop adequately,” said Matt Copot, vice president of maintenance at Transervice. “Inspect the air dryer, drain the vehicle’s air tanks daily, and check the dryer filter. If the dryer has a heater, make sure it works.”

Failure to remove moisture from an air system “can lead to freezing and deterioration of brake valves, solenoids and other air system components,” Puff said. “If excessive moisture is noticed when draining air tanks, it’s a good time to check for air leaks, check the air dryer operation and consider cartridge replacement.”

Using alcohol to address moisture in the air system is not advisable.

“Some fleets pour alcohol in the trailer air lines to prevent freezing or melt ice in the systems. We advise against doing that as the alcohol could affect the seals in the valves,” Brodie said. “Alcohol evaporators are a more acceptable alternative. It is much better to maintain your air system so that water does not get into it in the first place.”

Preventing water from entering the air system is a good year-round practice and especially important during winter.

“It is good practice to store trailers and air lines in a manner that prevents water and debris from getting directly into the glad hands,” Brodie said. “Much like the dryer maintenance, this is relevant year-round but more significant in the months when the water that gets in the lines could freeze and prevent you from releasing the trailer brakes.”

Other brake issues can crop up from easily overlooked sources like road de-icers,  which use salt to melt ice. Meritor’s Director of Engineering Joe Kay pointed out that in addition to accelerating corrosion and breaking down grease and lubricants,  which can lead to seal damage, this salty road slurry can also create serious brake issues.

“Another side effect we have seen with salt road de-icers is increased occurrence of sticking brakes,” Kay said. “This is a problem operators experience typically when a truck or trailer has the corrosive slurry on the brake surfaces. When the operator sets the parking brake, the vehicle may sit for several days. The corrosive environment, along with the parking brake set, will form an adhesion on the pad to the rotor or drum because of the gray iron corroding.”

Kay said it’s best to use shields when possible to protect brakes from corrosive slurry. Drivers should also be trained, he said, to warm the brakes before parking. Dragging the brakes slightly in the parking lot will warm the drum and hopefully evaporate any moisture, which will help to reduce the corrosive effects, he said.

Sand that’s applied to icy roads to improve traction can lead to braking problems, too.

“The negative effect on foundation brakes is the abrasiveness of the sand when it gets between the friction material and the rotor or drum,” Kay said. “This, too, can accelerate wear. Some fleets have found dust shields help in these extreme conditions.”

Coolant and other fluids

Though it’s often a bigger focus during the hotter summer months, a truck’s cooling system should also undergo a thorough check for winter.

“Coolant systems require routine maintenance, and winter prep is critical for an effective season of driving,” Puff said. “Coolant systems should be pressure tested for leaks, freeze protection level, and don’t forget to add the same coolant type to the system. There are many coolant types with varying technology, and adding the wrong coolant could deplete the inhibitors, causing many very expensive repairs down the road.”

A refractometer can test a coolant’s freeze protection levels. Puff cautions against depending on a floating ball-type hydrometer, as these can get contaminated over time and provide inaccurate results. He advocated using test strips to check the inhibitor protection level.

Wherever coolant flows, check those areas to ensure proper function.

“Check hoses, clamps, water pump and the radiator for leaks, cracks, dry rot, and ensure that the coolant freeze point is to your specifications,” Copot said.

Coolant isn’t the only fluid under the hood that could warrant a change as fall temperatures begin to slide.

“Don’t waste time waiting for your windshield to defrost,” added Jon Salter, director of shop operations for Pilot Flying J Truck Care. “By adding anti-frost and anti-fog treatments, you can hit the road and be on your way.”

Copot advised checking wiper blades, the washer fluid reservoir and the washer pump to ensure they work properly. "Make sure there is a proper spray pattern from the washer nozzles on the windshield,” he said.

Battery and other electrical tips

Batteries do not perform as well in colder temperatures, which makes checking them all the more important prior to turning trucks loose in freezing temperatures where battery breakdowns can incur costly roadside service. Cold engines require much more battery power to start, and heat is damaging to a battery. The damage done to a truck’s battery during the summer months may not reveal itself until the onset of cold weather.

“Service and test batteries individually by performing a load test on each of them,” Copot said. “In addition, check the battery age as older batteries can have reduced output during extreme low temperatures.”

Homer Hogg, vice president of truck services for TravelCenters of America, said winter can be more taxing overall on the electrical system.

“Winter also means driving during extended periods of darkness, which can cause stress to your alternator,” Hogg said. “Test your alternator’s ability to produce voltage and amperage now to help avoid some serious downtime this winter.”

Puff said a simple smart battery tester or carbon pile load tester can tell a lot about a battery’s health, adding that a discharged battery can freeze at around 30 degrees Fahrenheit while a fully charged one will begin to freeze only at lower temperatures.

Fontana suggested checking all exposed wiring for cuts and nicks, as corrosive road de-icing chemicals will use those openings as entry points into the electrical system.

“Make sure wiring connections are tight and clean, and then coat them with dielectric grease or spray to prevent corrosion from developing on wiring,” Fontana said.

Belts often are forgotten, but Hogg said they deserve special attention ahead of winter. When the temperature drops, belts can snap if they’re in poor condition.

“It is very difficult, if not impossible, to visually detect a bad belt,” he said. “Modern belts are made of ethylene propylene diene monomer (EPDM), which will not show visible signs of wear. A gauge must be used to detect the wear condition of the belt.”

Hogg recommended checking the entire belt drive system, including tensioners and pullers. The rule of thumb is to replace the tensioner during every other belt replacement.

“Lastly, don’t forget to check belt alignment,” he said. “The chirping sound that we often hear in the belt drive system is typically caused by a belt that is not aligned properly.”

Fuel system and other tips

·      Check your fuel filters and water separator as you do not want moisture in your fuel. Moisture in the fuel will cause fuel restrictions or contamination.

·      Check your fuel tanks for any water and drain accordingly.

·      Check your heater and defroster. Make sure everything functions including direction of air flow and the blower strength so you can have effective defrosting.

·      Check your tires and tire chains where applicable. Make sure your tires are within tire program pull points and properly inflated as cold temperatures will lower the pressures, and snow will reduce traction. 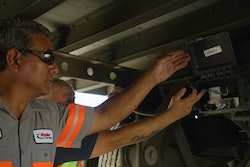 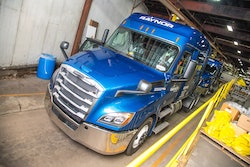 Why customer transparency is vital in developing a contract maintenance program 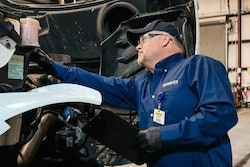 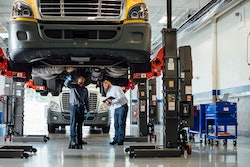