Solving the unsolvable? The solution to trucking’s biggest problem isn’t obvious; the industry’s need for action is 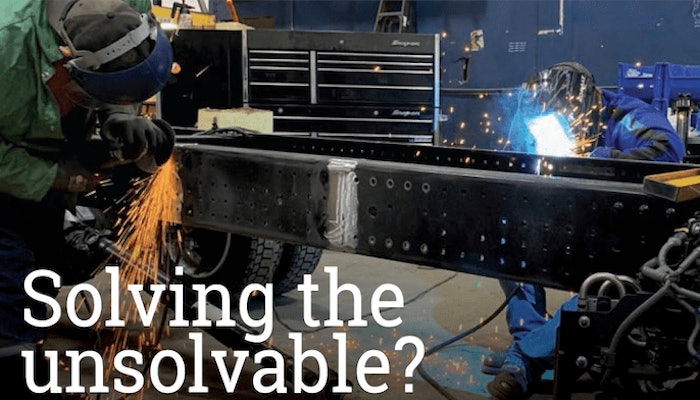 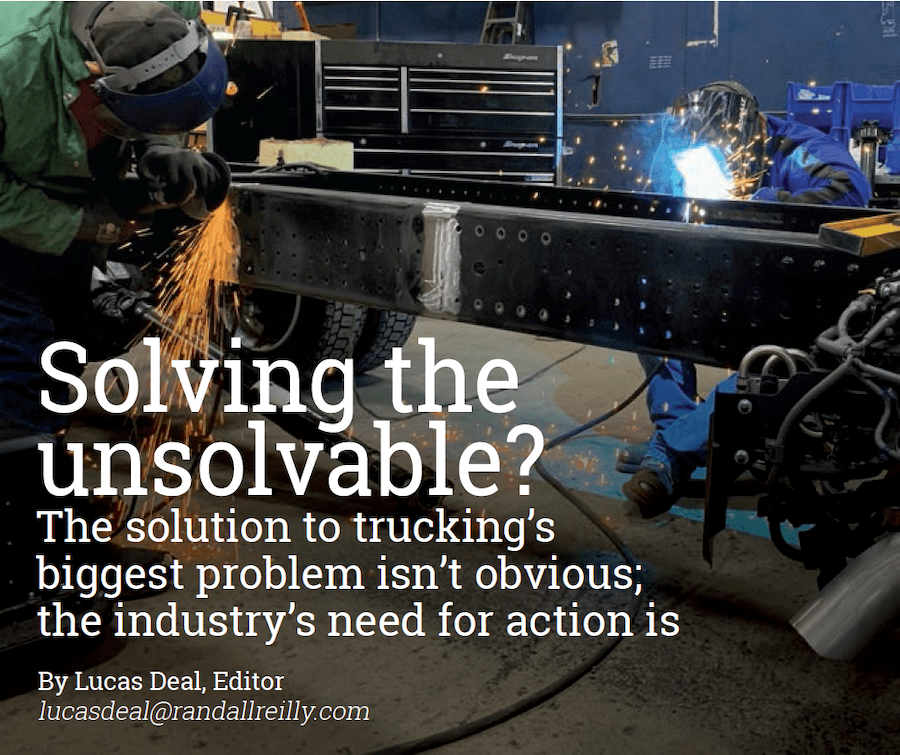 One pervasive opinion plaguing trucking’s service channel is that its employment issue is unsolvable. That even with stronger recruiting efforts and improved retention practices, trucking will never be able to acquire and maintain enough tech talent to render its hiring problems a thing of the past. The work is too specialized, the industry too far from the mainstream and the jobs too laborious to hook young people into technical careers.

To many, the service channel is forever doomed to push its employment boulder up the mountain knowing it will never reach the top.

Others look at the future more positively.

For every pessimist there’s an optimist; and for every industry veteran who sees the technician employment shortage and fears the worst, there’s another professional in a similar role who sees opportunity.

But no matter where they fall, everyone tasked with hiring in today’s service channel is in agreement on one point — if the industry has any hope of solving its biggest problem, it has to start working on it immediately. Trucking’s future will be defined by maintenance. Any service business that fails to address its employment challenges today is endangering its viability in the years to come.

A data point that should encourage service businesses in the trucking industry regarding employment is this: The North American medium- and heavy-duty technician population is significantly younger than most believe. It’s true that many skilled veteran technicians are retiring across the marketplace, but these exiting techs do not represent anywhere close to a majority of the market’s overall population.

According to Trucks, Parts, Service’s 2017 reader profile survey, most technicians are still many years from retirement. Among service providers who responded to that survey, only 1.5 percent claimed the average age of their technicians was greater than 60 years old. That segment was dwarfed by all other options — 72.1 percent of responders pegged their average technician age at 31 to 45; 22.1 percent said their average tech was 46 to 60 years old, and even 4.4 percent of responders said their technician population was less than 30 years old on average.

That data was further confirmed by a 2018 survey by Randall-Reilly (publisher of TPS) of more than 1,200 professional technicians across four industries. In that report, nearly 60 percent of responders claimed they had worked in the maintenance industry for less than 10 years, while only 19 percent had at least two decades of experience in their field.

When coupled with the more than 10,000 technicians graduating from diesel and heavy truck post-secondary schools each year, it appears the service channel continues to replenish its employment base. Landing and keeping these technicians, admittedly, is another story (See Parts II and III of our special report for more), but solely from a supply perspective, the industry’s talent pool hasn’t run dry.

In his past role as chairman of the ATA’s Technology & Maintenance Council (TMC) SuperTech and FutureTech competitions, George Arrants says he met hundreds of younger technicians in their first years in the trucking industry who loved their job and were eager to build a career.

He says many of those technicians who found work with fleets, dealers and independent service shops that valued their technicians and were invested in their success are still in those roles or have been promoted. He says it’s those who weren’t as fortunate have since left the industry. When he looks into the future, Arrants says that’s one of the first problems the industry needs to solve.

“We can’t be out there eating our young,” he says. “We have to be thinking about how to onboard them into our company culture so they want to stay.”

The service channel also can take solace in that its challenges aren’t being ignored by industry partners. The expansion of the supplier community’s technical training library has exploded over the past decade as manufacturers identify technical guidance and expertise as a key factor in customer satisfaction and technician retention.

Additionally, many OEMs and industry organizations have introduced partnerships with vocational schools in the hopes of creating a stronger employment pipeline to the service channel.

Regarding the focus on technical guidance, Meritor Technical Training Manager Peter Adair notes, “We recognize if we have fewer techs available that we need to grow their skills to make up for that shortage.”

He adds, “Successfully attracting the next generation of professionals to our industry will require working partnerships between manufacturers, dealerships and educational institutions.”

But even with a growing segment of the trucking industry dedicating resources to the technician shortage, the issue still presents major challenges. Withstanding attrition of the industry’s current workforce and strengthening retention in a competitive job market is the biggest challenge Arrants sees.

Speaking at TMC’s Annual Meeting in March, Arrants cited a 2018 ASE Career Education survey of recent automotive and diesel vocational school graduates that reported more than 40 percent of new vehicle technicians had decided to exit their new industries within two years of their graduation. Arrants says these former techs referenced a number of reasons for their career shift, though better wages and assistance with educational expenses was the dominant reason given.

“We have shops in our market paying $9.50 an hour and you have to bring your own tools. Why would a kid want to stick with that job if you can walk into a Bucee’s [Texas gas station chain] and make $14 off the street with a 401(k) and three weeks of vacation?” he says.

And technicians aren’t being pulled out of the market exclusively into other transportation roles. The U.S. unemployment rate hit a 50-year low in September. Jobs can be found anywhere.

“Too many of these techs are coming out of vo-tech programs carrying student loan debt,” says Tim Spurlock, president and co-founder, American Diesel Training Centers. “If you’re trying to take care of a family on $16 an hour with a $40,000 loan to support, you do the math … there’s going to be job hopping.”

And it’s not as if the work is getting any easier.

The technology boom that hit trucking last decade fundamentally changed the way the industry’s equipment works and must be repaired. What was once a mechanical career now requires a deep understanding of connectivity, computer diagnostics and proactive maintenance.

Coldwell adds that while “mechanically savvy and hands-on technicians will continue to perform a critical role in service shops across the country,” current and future technicians also will be expected to perform “more vehicle healthcare that keeps the wheels rolling and less fix-after-failure emergency triage.”

Customer expectations also are on the rise, notes Isuzu, though the truck maker is quick to point out the industry’s growing focus on “prognostics and the ability for the OEM to remotely access the vehicle and guide diagnostics” should reduce the time a tech spends searching for root causes before finally diving into a repair.

Yet even with that assistance, those in the service channel acknowledge stepping into a service bay today is stressful — particularly early in one’s career.

“A lot of these techs come out of these schools and they’re scared,” says Chris Paris, service manager, Affinity Truck Center. “They want to do a good job but they feel the pressure. It takes a lot of coaching” to make them comfortable in the role and the business.

Not all technicians enter the market with proper training either. Arrants, Spurlock and Brandon Eckenrode, director of development, Collision Repair Education Foundation, the technician recruitment arm of I-CAR, say the service channel must do a better job of communicating with educators to develop a curriculum that best prepares new technicians for the work they’ll be doing upon their entrance to the workforce.

This focus on common service work, such as vehicle inspections and preventive maintenance, is more cost effective for the student and provides a base level of education that can be built upon through an employer once the tech has committed to the career.

By getting involved with a prospective employee’s education early and focusing his learning on entry-level work, Eckenrode says service shops can make new employees more productive on the job, “which should result in them increasing their earning potential.”

One thing is for sure, experts say the industry can’t afford to lose any more skilled workers. Not when its technician population needs are expected to rise.

Isuzu states there is no forecast that shows the technician volume increasing over time, which means the industry’s employment challenge is likely to get worse before it gets better.

Adds Coldwell, “The trucking industry is the engine that drives our nation’s economy. The movement of freight, growth of cities, industrial and commercial construction and countless other societal needs rely on this industry in some shape or form. Add to that the advances in autonomous vehicles and introduction of alternative fuels, and the demand for technicians will only increase.”

To read more from Part IV of our special report, please see below:

The next steps for service: A look into the industry’s future

A national challenge: Trucking isn’t the only industry facing an employment shortage

Expectations for the future: Advancements in equipment, technology will require more education for technicians