The task force formed to create the RP spent its first weeks attempting to narrow the scope of such a broad topic. Eventually, task force co-chairs Bruce Love and Mike Payne, along with Service Provider study group chairman Kenneth Calhoun, determined the best direction for the RP would focus on technology—specifically a clear guideline for service and fleet management systems to build application program interfaces (API) that would allow dissemination of data from both sides through the entirety of a service event.

Calhoun says the scope hits on a conversation point he’s been discussing with fleet customers and industry colleagues for years.

“We [service providers and fleets] are both constantly inputting vehicle information and service information into our systems. Why in the world can we not just get those systems to talk to each other?” he says. “We are living in the age of technology. Why don’t we approach this from a technological standpoint?”

He adds, “As an industry, we are way too sophisticated to continue to rely on phone calls as the method for customer updates.”

A consensus was met for the proposed RP in February at TMC’s Annual Meeting, and the document will go to ballot at the organization’s fall meeting in September. If it passes there—Calhoun, Payne and Love are optimistic—it will then go through a brief appeals process and will be published early next year.

The proposed RP will apply to all customer types, and has been developed to sync with several other TMC recommended practices regarding fleet/service provider relationships. “We want to leverage the technology and processes we already have to make [the RP] work,” Payne says.

Decisiv’s Michael Riemer says standardizing the document’s language with VMRS is a no brainer. “When you can structure information in a standard way it is much easier to deal with,” he says. 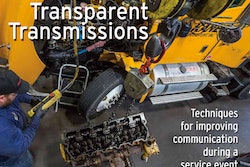 Transparent Transmissions: Techniques for improving communication during a service event