Bandit Big Rig Series is teaming up with the Wyakin Foundation.

The organizations announced Wednesday that during the upcoming Bandit season fans will have the chance to donate to the Wyakin Foundation at every single Bandit race in 2018. Known for helping helping wounded veterans transition from active duty to civilian life, the Wyakin Foundation equips veterans with the resources needed to find long-term success. Their support includes mentorship, development of professional skills, financial support, tutoring and networking.

Bandit Big Rig Series Owner Craig Kruckeberg, also chief visionary at Minimizer, says he’s excited to bring Wyakin into the Bandit family, and looks forward to assisting the organization during the coming year. “We’ve donated to Wyakin in the past, and it’s a fantastic organization dedicated to helping our veterans,” he says.

Wyakin Foundation Executive Director Brent Taylor is equally excited, and says Bandit fans can be sure when they support Wyakin, they will be supporting a worthy cause.

“Our organization has a 95 percent success rate transitioning veterans back into the workforce, 80 cents of every dollar donated goes directly to the programs that serve our veterans, so you can be sure your money is changing lives,” he says.

Bandit fans will find a Wyakin booth at every race, where they can learn more about the program and donate to the cause. In addition to the physical donation box found at each race, fans can also make donations via the Bandit’s ticket page (free will donation to register for the Fan Series Truck Show) or directly on the Wyakin website via a link from the Bandit website.

“We want to provide several different ways to donate just so fans can choose whichever one is easiest for them,” Kruckeberg says. 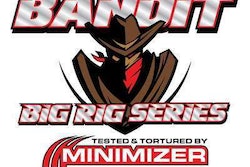