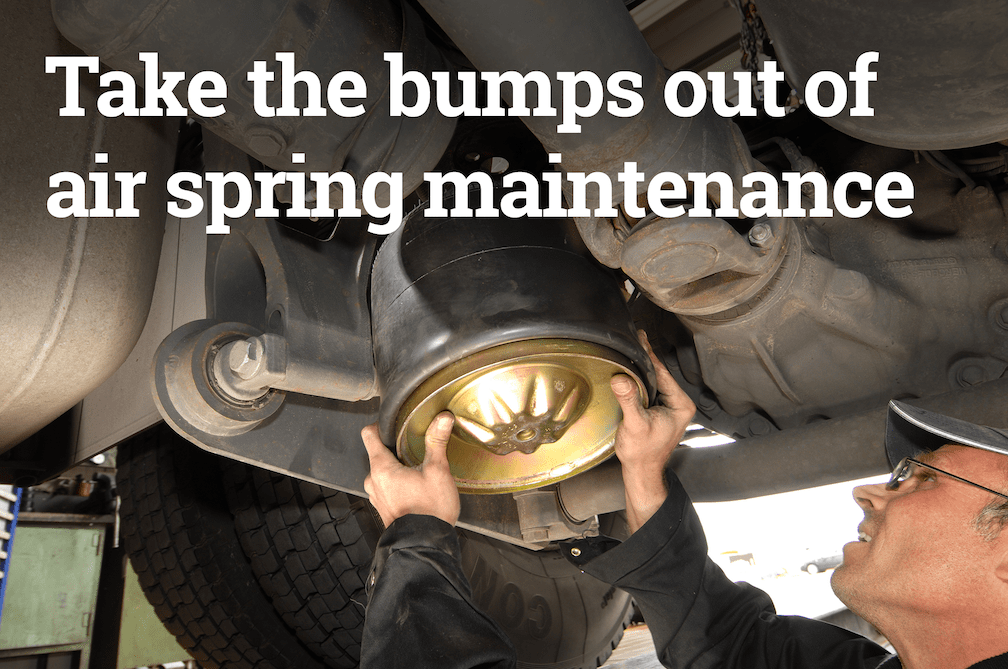 Air spring maintenance is part of a larger suspension system that sometimes goes unnoticed or worse yet neglected.

With the rush to get trucks back out onto the road, some technicians may settle for simply swapping out a leaking or blown air bag without checking other vital components that support the entire system.

“I’ve seen them before where they’ll just replace the air bag five times before they’ll replace the bushings. They don’t want the truck down,” says Matt Thompson, vice president, Blue Hen Spring Works. “They can replace an air bag in a half-hour to 40 minutes, whereas they’d have to jack the truck up, pull the wheels off, take the arms down and press the bushings out. They’ll lose two days’ worth of work doing that.”

The problem with shortcuts is they can lead to even more problems down the road.

“The bushings in the arms, sometimes they need to be replaced and they let it go so therefore the weight’s not distributed straight up and down on the air spring and they kind of get a bit of lean on one side or the other to the arm and it gets movement,” Thompson says. “The spring is pretty much designed to hold up and down. It doesn’t act like a shock absorber somewhat from the side to side. Once it gets loose it’s a snowball effect. The bushing goes bad so it puts more side or angle stress on the side springs. It just compounds everything.”

Failing to replace torque rods also can lead to more problems at a later date.

“By avoiding or putting off what you may think to be a minor repair could turn out to be a costly repair down the road,” Blake says. “If an air spring has failed or is working improperly it could put added stress on the rest of the suspension system. The shocks could wear out faster or even break and need replacement.”

Putting off an air spring repair also may impact brake performance and lead to greater wear on supporting parts.

“The brakes would have increased pressure put on them to stop the truck or uneven pressure if the truck is leaning due to an air spring not inflating properly,” Blake says. “If the air springs have failed and they are not properly inflated, this could cause the axle to have excessive travel which could cause the parts to encounter each other, causing damage or possibly breaking those parts.”

While replacing the air spring, Jacqui Stockwell, product manager, Meritor, says it’s not a bad idea to replace other components.

“A tip for general maintenance is if you have to change out one air spring, it is best to change the other air spring on that axle,” Stockwell says. “It is also recommended that both shocks are replaced as well.”

“Some of the symptoms that may be associated with a faulty or even failing air spring may be a lower or an uneven truck,” Blake says. “If one bag might be faulty it would not fully inflate, making the truck lower where that air spring would be. Another symptom would be a bumpy ride. Air springs are meant to smooth the ride and if the truck is bouncing more than usual, it could indicate that an air spring is not responding the way it should.”

Sometimes audible clues can occur, including an air compressor that’s cycling too much or an air bag that’s developed a leak.

“An obvious symptom could be the sound of air leaking from the bag, indicating a possible hole in the rubber itself or at one of the seams between the base or top plate and the rubber,” Blake says. “Finally, if you see any deformities in the air spring itself, in the rubber, the top or base, or the way everything is put together, that could indicate a faulty air spring.”

Deformities can be more of a problem depending on how the truck is used and where it’s driven. Road salt can lead to corrosion and performance problems, but that’s not all. Thompson points out that Blue Hen Spring Works, located in Milford, Del., has come across a unique problem owed to typical truck loads in that area.

“A lot of our customers are chicken haulers so they get a lot of the waste from the chickens, so corrosion is a big part,” he says. “It causes a lot of the tops of springs to start flaking; we get a lot of that. And once it gets under there it can push the spring. The corrosion will actually get in between the two pieces of metal and cause it to separate a little bit so instead of your spring riding flush, the top plate is pushing from one side more than the other at an angle. It compounds the problem. Corrosion is a big thing around here.”

Additionally, some liquids may seem harmless but still should be avoided. This includes hazardous solvents, hydraulic oils or lubricants, which can break down the rubber making it weak and susceptible to failure, Blake says. 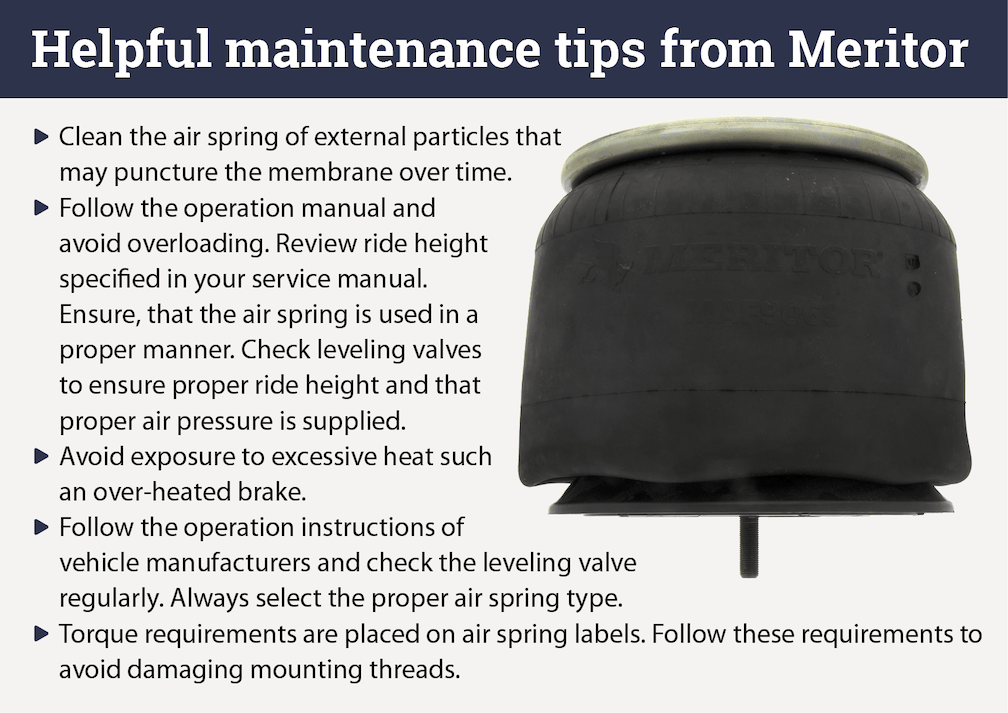 The road itself can prove challenging with plenty of sharp objects like glass, pieces of metal and stones striking the air springs. Not only that, but technicians may accidentally cut the membrane with a screwdriver, Stockwell says. Abrasion damage to the bellows can occur because of contact with other parts of the vehicle, such as air compressor lines, bolts, frame rails or even a dirty air spring piston.

Nearby suspension components also may present problems that lead to air spring damage.

“When the lift stop has failed or the shock absorber is installed in an improper manner, an overextension of the air spring can occur,” Stockwell says. “Metal parts are broken and the air spring could be damaged.”

While it might not seem like much, a damaged or missing bump stop can lead to piston distortion. Overloading the truck also can harm the piston along with other components.

Besides inadvertently damaging an air bag with sharp tools, technicians may get carried away with over-tightening air spring hardware.

“Over torqueing the fitting during installation can break the fitting or damage the threads, causing the air spring to possibly break off or become loose,” Blake adds. “This can be avoided by following proper installation instruction and torque recommendations.”

“They run some of these air suspension systems in dump trucks that I believe — just seeing it my whole life — that some of these systems are better on over-the-road trucks than they are on some of the construction vehicles like dump trucks,” Thompson says. “They overload the springs and the system can’t take it. For the guys working construction, there’s just so much side pressure coming in and out of the sand pits or the quarries. I’m old school. I think that some of the old steel suspension systems hold up better.” 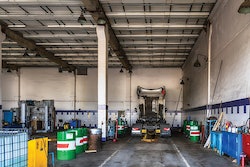