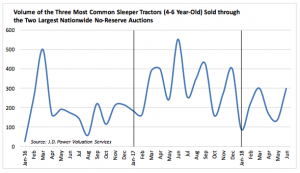 The volume of used Class 8 sleepers sold at auction leaped upward in June but still remained below demand thresholds as prices were stable across the industry, J.D. Power writes in this month’s Commercial Truck Guidelines market update report. Prices were mostly stable in the retail market as well, though volume was down.

In the auction market, J.D. Power writes the volume of the three most popular sleeper tractors sold through the two largest nationwide auction companies more than doubled month-over-month in June. The increase only moves the volume total back to the levels seen in March, but J.D. Power states the 121 percent increase does return the market to levels “more in line with expectations.”

The Class 8 retail market saw lower volumes in June though prices remained mostly unchanged to down slightly. J.D. Power writes “volume remained subdued as fleets kept their lower-mileage trucks in service rather than trading them in as expected.”

New, low-mileage trucks that are available, however, are bringing strong money. 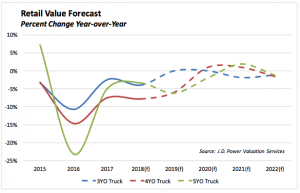 In the most popular three- to five-year-old cohort, J.D. Power states average prices last month were as follows:

J.D. Power states late-model trucks sold in the first five months of 2018 brought 4.5 percent more money than in the same period of 2017.

The biggest issue in the retail market was movement. J.D. Power states volume was down across the board. Sales per dealership slipped by 0.8 units to 4.1 units in May. This is the lowest result since December 2015. As for why, J.D. Power writes “fleets need all the trucks they can get to move freight and compensate for the impact of the ELD mandate, so trucks that would otherwise have been traded in are being kept in service. We expect retail volume to increase incrementally in upcoming months to commensurate with supply.”

“In the second half of the year, OEMs will gradually iron out component shortages and increase delivery of new trucks. Trades will return to a more typical level.”