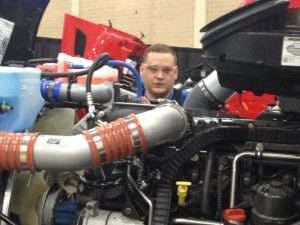 Brian Smith, a technician with Rush Enterprises, gets eye-level in his work.

Growing up, there was little doubt Jeremy Dones would join the military. What might come after was anybody’s guess.“I always liked trucks,” he says. “It was kind of a family thing; always working on stuff and fixing things.”

After a four-year tour of duty with the U.S. Marine Corps Infantry, Dones – now 26 years old – graduated from the diesel technician program at Elizabethtown (Ky.) Community and Technical College and turned his love of trucks and fixing things into a second career. Dones’ mechanical aptitude, which helped him land a job with a shipper with a fleet of Peterbilt trucks, was a natural fit in an industry he had identified as needing qualified employees.

“There’s a shortage of truck mechanics,” he says, “and it’s only going to get worse.” In fact, trucking will need as many as 200,000 technicians over the next 10 years just to keep up with current truck maintenance demands, says Phil Byrd, chairman of the American Trucking Associations and president and CEO of Bulldog Hiway Express. Rush Enterprises, which operates the largest network of medium- and heavy-duty truck dealerships in North America, is currently short about 350 technicians, says Mike Besson, vice president of service operations for the company.

According to the U.S. Department of Labor, over a million jobs exist today in the auto, diesel, and collision repair industries with growth of 17 percent projected through the year 2020.

Unfortunately, only about 3,500 diesel and truck technicians enter the market through technical schools annually, according to The National Institute for Automotive Service Excellence. That’s not enough to keep up with current growth trends and retirement rates; 10,000 Baby Boomers (who make up 26 percent of the U.S. population) will reach retirement age every day through 2029, according to Pew Research. Add to that the fact that truck dealers are just one segment competing for those new entrants – equipment dealers, independent repair garages and fleets pull from the same pool – and the situation looks bleak, at best.

Without enough young entrants, the average age of technicians is on the rise, Besson says,  citing an internal average of 43 years old. “That’s troublesome because as that age grows…I’m more worried about where we’re going to be in five years.”

Given these realities, it’s not surprising that finding good employees, including technicians, is a concern cited by 51.3 percent of respondents to a recent Successful Dealer survey.In fact, labor availability as a whole was the No. 2 overall concern cited in the survey, trailing only the political climate in Washington. 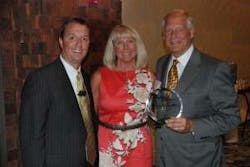 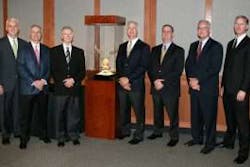 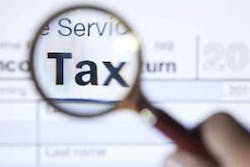 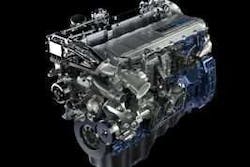