Mack Trucks cut the ribbon Thursday on a new production facility in Salem, Va., the company will use to build a new medium-duty truck lineup.

Mack’s Roanoke Valley Operations (RVO) – a 280,000 sq.-ft. facility, representing an investment of $13 million in Roanoke County – will employ upwards of 250 people and is charged with birthing Mack’s new MD6 and MD7, Class 6 and Class 7 trucks, respectively.

Jonathan Randall, Mack Trucks senior vice president of North American sales and marketing, noted the official unveiling of RVO and the company’s expanded lineup caps a process that started two years ago. Governor Ralph Northam has approved a $700,000 grant from the Commonwealth’s Opportunity Fund for the project. Mack’s investment will be being used for equipment, tooling and building enhancements.

The company adds the operation is expected to have annual impact of $364 million across the region.

Mack says its new medium-duty entries, the Class 6 MD6 and Class 7 MD7, unlock new over the road segments for the truck maker.

The Mack MD6 has a Gross Vehicle Weight Rating (GVWR) of 25,995 lb., and the MD7 model has a GVWR of 33,000 lb. Both are exempt from the 12 percent Federal Excise Tax (FET). Mack says serial production of the trucks is set to begin this summer and the company is already taking orders.

The company also notes the MD lineup becomes the first automotive project in the State of Virginia to go from prototype to production, and targets trucking applications in dry van and refrigerated segments, and stake/flatbed, dump and tank truck vocations.

The exterior is stylized similarly to Mack’s on-highway champion, Anthem, but the new MD trucks will be equipped with Cummins 6.7-liter engine, making 300 hp and 660 lb.-ft. of torque, and matched with an Allison 2500HS transmission and Meritor axles.

Available in a 4×2 configuration, Mack says both models will feature a sharp wheel cut for urban maneuverability and noted the MD Series cab design features a short, industry-leading, 103-in. bumper-to-back-of-cab (BBC) measurement. 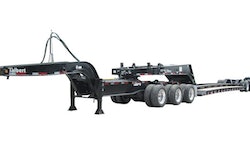 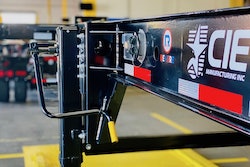 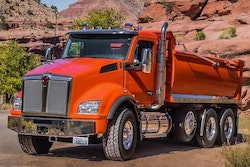 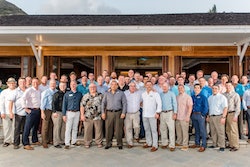