New Class 8 truck orders increased in July, doubling the total garnered during the same time last year, according to ACT Research and FTR.

The strengthening truck market that occurred in June and July resulted in further improvement for new truck orders, with Class 8 net orders for the last 12 months now totaling 168,000 units, FTR reports. Demand for new trucks was better than expected, but uncertainty around increasing coronavirus case counts and Congressional action on unemployment benefits may dampen the market in the fall.

“As we hit the height of summer demand, the freight markets showed strength and resilience and that led to additional orders for trucks. The order activity for both June and July was more robust than expected and is good news for the equipment producers. However, despite the increasing orders, FTR still expects the Class 8 market to maintain a slow, steady recovery,” says Jonathan Starks, FTR chief intelligence officer

“The freight markets sustained a traumatic decline of volumes at the start of the pandemic and consumer demand, on an absolute basis, will remain weaker as we deal with high levels of unemployment and a Congress that has been unable to foster a bi-partisan solution to stimulate demand,” Starks says. “The OEMs received a needed boost from July orders, activity that will help keep the industry moving in an upward direction.”

“Unlike Class 8, the medium-duty market did not swoon sharply through the worst of the shutdown. And, while orders were down on a nominal basis, seasonal adjustment boosts July’s Class 5-7 orders to a five-month high,” says Kenny Vieth, ACT president and senior analyst.

Preliminary data indicates July orders for medium- and heavy-duty vehicles, overall, jumped to a six-month high, according to Vieth.

“Less than a week ago, we learned that the U.S. economy was 9.5 percent smaller in Q2 than it was in Q1 and 10.6 percent below its end of 2019 level,” Vieth reports. “Additionally, when the COVID began to bite in late February, there was a strong case to be made that the trucking industry was suffering from lingering overcapacity that was still putting downward pressure on freight rates, and by extension, carrier profitability.”

Relating these facts to the North American heavy-duty market, Vieth says, “The context of rising rates and improving carrier profits adds perspective to what is now occurring in Class 8 orders: Supply matters. With many drivers (and trucks) sidelined, there is now insufficient available capacity for rebounding freight volumes. There is a strong relationship historically between carrier profits and equipment demand.”

Complete industry data for July, including final order numbers, will be published by ACT Research in mid-August. Final data will be available from FTR later in the month as part of its North American Commercial Truck & Trailer Outlook service. 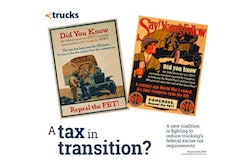