Beginning in the auction sector, J.D. Power states November’s volume and pricing were both similar to October. A larger sample size of model-year 2017 trucks brought the company’s average back towards a more logical figure. Additionally, a notable volume of model-year 2018 trucks with very high mileage continues to cycle through the auctions.

On a month over month basis, the company states its benchmark group of 4- to 6 year-old trucks brought 6.2 percent more money, recovering half of last month’s decline. In the first 11 months of 2020, pricing averaged 7.1 percent lower than the same period of 2019, though the company adds if only looking at the second half of the last two years, J.D. Power’s benchmark truck has increased 2.8 percent per month in 2020.

“It looks like the fourth-quarter plateau in pricing we predicted was in effect for October and November,” the company says. “Pricing for trucks with average and lower mileage is on par with the second quarter of 2019, which we consider fairly healthy.”

The company also echoed statements from other used truck market experts that with the supply on the rise and demand for freight picking up, the market should support pricing through the 2nd quarter of 2021, “barring any major economic event.”

Last month’s sales totals slipped in the retail market, but the drop in volume did not impact pricing, which J.D. Power states “remains firm, not particularly strong by historical standards, but also not depreciating.”

Retail depreciation is now averaging 2.1 percent per month, an 0.3 percent improvement from last month — and close to zero when looking at just the latter half of the year, J.D. Power says. Dealer sales per rooftop fell to 4.2 trucks, the second consecutive month of pullback but still well ahead of the same point last year.

Sales were mixed in the medium-duty sector, with cabovers doing better than conventionals.

Overall, J.D. Power states the used truck market looks to be on solid ground entering the new year — citing increasing distance from the presidential election the end of year tax and depreciation policies as positives for the market.

“December can be a higher-volume month at the auctions and on retail lots, as buyers look to lock in tax and depreciation incentives before the year ends. With conditions now better than most of 2019, sales teams should be somewhat busy,” the company says. “Meanwhile, a new round of stimulus looks more likely than not at the time of this writing, which would mitigate any new layoffs or cutback in consumer spending. As long as unemployment remains stable to improving, economic conditions should look pretty similar going forward.” 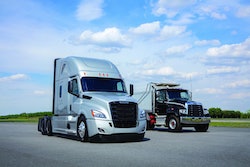 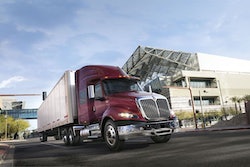 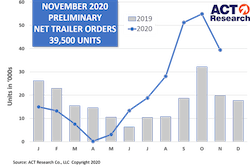 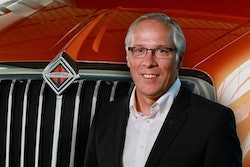