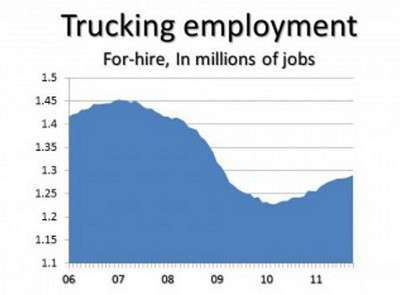 The for-hire trucking industry added 3,600 new payroll employees in November, according to preliminary numbers released Friday, Dec. 2, by the Bureau of Labor Statistics. BLS, however, revised downward its preliminary figures for October by 600 jobs.

The BLS numbers for trucking reflect all payroll employment in for-hire trucking, but they don’t include trucking-related jobs in other industries, such as a truck driver for a private fleet. Nor do the numbers reflect the total amount of hiring since they only include new jobs, not replacements for existing positions.

The entire U.S. economy added 120,000 jobs in November, according to preliminary BLS estimates. In addition, BLS revised its initial estimates to show that the economy added 72,000 more jobs in October than initially reported. The unemployment rate dropped four points to 8.6 percent — its lowest level in about two-and-one-half years.