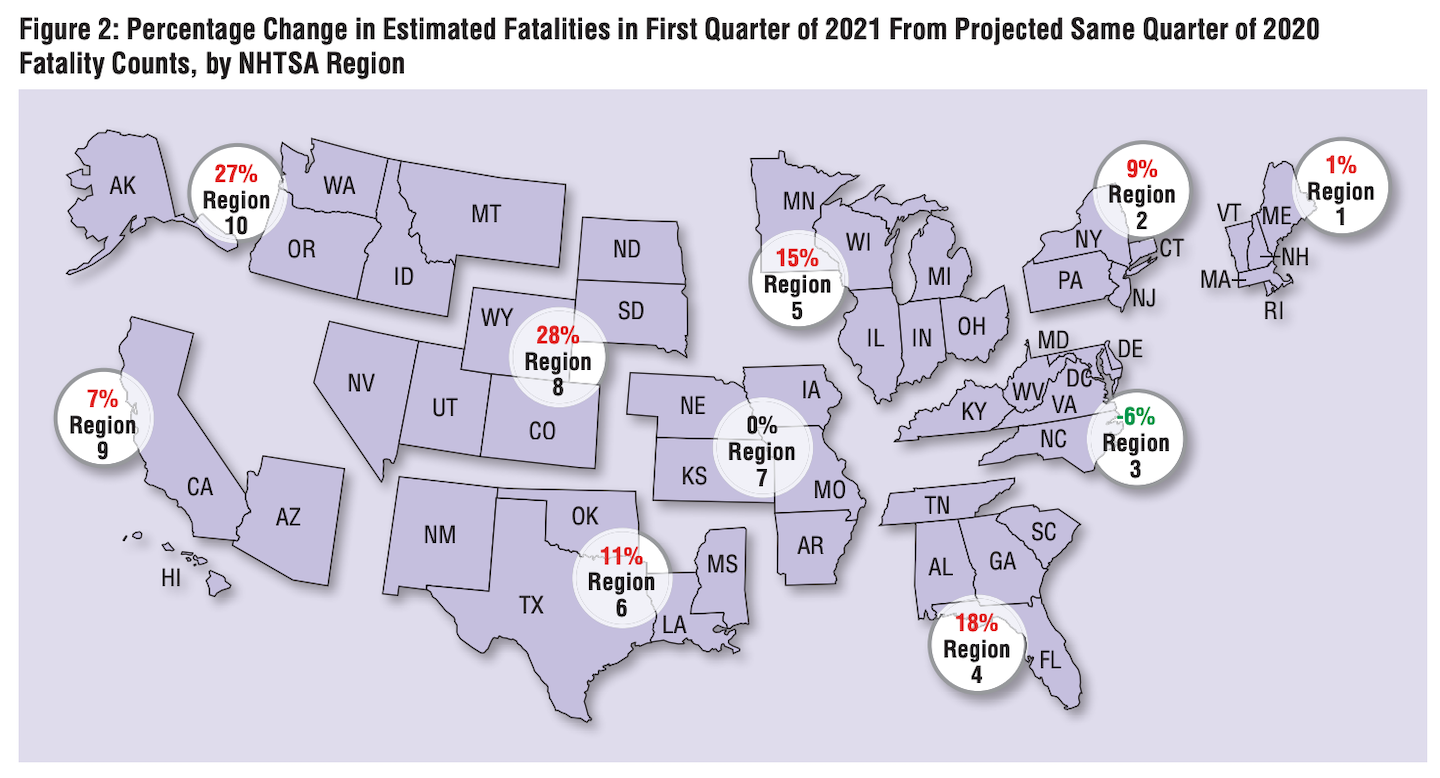 The new year got off to a hot start with regard to traffic fatalities, logging a 10.5% increase in deadly accidents in the first quarter this year compared to last, according to U.S. Department of Transportation’s National Highway Traffic Safety Administration's Early Estimate of Motor Vehicle Traffic Fatalities for the First Quarter of 2021.

NHTSA estimates that 8,730 people died in motor vehicle traffic crashes in the first three months of 2021, and the increase comes even as driving declined. Preliminary data reported by the Federal Highway Administration show that vehicle miles traveled (VMT) in the first three months of 2021 decreased by 2.1%, or about 14.9 billion miles. The fatality rates per 100 million VMT for the first quarter of 2021 increased to 1.26 fatalities per 100 million VMT, up from the projected rate of 1.12 fatalities in the same time last year.

“We must address the tragic loss of life we saw on the roads in 2020 by taking a transformational and collaborative approach to safety. Everyone – including those who design, operate, build and use the road system – shares responsibility for road safety,” said Dr. Steven Cliff, NHTSA’s Acting Administrator. “We are working closely with our safety partners to address risky driving behaviors such as speeding, impaired driving, and failing to buckle up.”

Early estimates for 2021 suggest driving patterns and behaviors the agency reported in 2020, which changed significantly from previous years, continue to prevail and that drivers who remained on the roads engaged in more risky behavior, including speeding, failing to wear seat belts, and driving under the influence of drugs or alcohol.

The preliminary Q1 2021 figure doesn't account for truck-involved crashes and fatalities, but earlier estimates from NHTSA show that fatalities involving at least one large truck, which NHTSA defines as those with a weight rating higher than 10,000 pounds, were down in 2020 despite an overall increase in traffic deaths.

Fleets asked to weigh in on top concerns in trucking

Owner-operators and other trucking industry stakeholders are being asked to rank their top issues of concern for the industry, along with potential strategies for addressing each issue.

The American Transportation Research Institute on Wednesday launched its annual Top Industry Issues Survey. Now in its 17th year, ATRI’s annual analysis not only ranks the issues overall, but also provides details on where critical topics are ranked differently by motor carriers and truck drivers.

“Completing this survey only takes a few minutes, but its impact can be immeasurable,” said American Trucking Associations Chair Sherri Garner Brumbaugh, president and CEO of Garner Transportation Group. “The data ATRI provides will chart the course for the industry by providing a clear picture of the landscape we face.”

The survey will be available online here through Oct. 15. The results of the 2021 survey will be released Oct. 24 as part of ATA’s Management Conference & Exhibition in Nashville, Tennessee.

Diesel fuel prices across the U.S. hit their highest point of 2021 during the week leading up to Labor Day, according to the Department of Energy’s weekly report.

The U.S.’ average price for a gallon of on-highway diesel now stands at $3.373, which is up 3.4 cents over the previous week. The previous high mark for 2021 was set during the week ending Aug. 2, when prices hit $3.367 per gallon. The most recent week’s national average is also the highest since October 2018.

Last week, the most significant increase in prices across the country was seen in the Gulf Coast region, where prices increased by 4.4 cents, followed by the Midwest region, which jumped by 4.3 cents.

The nation’s most expensive diesel is in California at $4.316 per gallon, followed by the West Coast less California region at $3.664 per gallon.

Prices in other regions, according to DOE, are:

ProMiles’ numbers during the same week saw fuel prices increase by 2.2 cents, bringing its national average to $3.277 per gallon.

Amazon announced Wednesday its plans to open its first mid-Michigan fulfillment center, along with three additional operations facilities that will support its customers in the metro Detroit and Grand Rapids areas. The announcement comes as the company celebrates the opening of three new facilities in the state, including Amazon’s Pontiac robotics fulfillment center.

“We’re excited to expand our investment throughout the state of Michigan with the addition of these new facilities,” said Alicia Boler Davis, senior vice president of Global Customer Fulfillment for Amazon. “This expansion not only allows us to better serve our customers across the state, but also enables us to boost the local economy and drive more opportunities for job creation. We’re proud to have created more than 21,000 jobs so far, and look forward to our continued growth in Michigan.”