Coolant maintenance not ‘set it and forget it’

Cooling system problems cause 40 percent of all engine service, making it one of the most misunderstood systems on a commercial vehicle.

Many coolant suppliers attribute that confusion to the number of coolants available in the market and the monitoring each require.

Providing expertise on coolant and cooling system maintenance offers aftermarket businesses the opportunity to seize and maintain sales of one of the industry’s most popular commodities.

“Fully formulated coolants protect by layering down over everything and creating a blanket [to prevent corrosion],” says Jeff Snyder, industrial brand specialist at Chevron. “Think of it like a fire extinguisher, and how it creates layers of protection. Conventional coolants work the same way.”

Inorganic additives are mixed into conventional coolant as supplemental coolant additives (SCA), such as silicate, phosphate and nitrate, Snyder says. These elements are then pre-charged when the coolant is formulated, creating the coolant’s method of protection.

“These additives are very stable,” says Dilley. “When they are placed in the cooling system they cover it completely and provide equal protection throughout the system.”

But providing this level of protection has its downside. Because the IAT used in conventional coolants is formulated to use all additives immediately, the additives break down at a faster rate than their extended life counterparts.

“Most of the conventional coolants on the market today will get you out to those [life cycle] numbers, but only if you add SCA during regular maintenance stops,” Snyder says. “They break down without them.”

“Typically this can be done with in-field with a test strip or in the lab,” adds Doiron.

The other coolant option in the market today, extended life coolant, eliminates some of these maintenance needs with much longer maintenance intervals.

Introduced in the mid-1990s, extended life coolants have quickly become the preferred option for OEMs and most fleets.

RELATED: How bad can it be?

Granger says extended life coolant works by identifying chemical imbalances caused by corrosion and dispatches additives directly to that location. In a well-maintained engine that may only be a few spots, which means more addi- tives are spared for future use, hence the extended life moniker.

And because today’s new heavy-duty engines are built with a variety of metals, extended life coolants are available with and without nitrate additives so they can be used with all OEM designs, says David Turcotte, technical director for engine coolants at Valvoline.

The extended life coolant products in the market today have life cycles from 600,000 to 1,000,000 miles, depending on the brand and the additive extender package recommended.

And coolant suppliers say those impressive numbers aren’t all talk. With proper scheduled maintenance, extended life coolant truly can last that long. “It’s really amazing how impressive these coolants are,” says Turcotte. “They come out of the bottle ready to protect the engine for several hundred thousands of miles.”

Adds Snyder: “If a customer is really looking at extending out that coolant out near a million miles we advise them to check the coolant at least once a year.”

But that doesn’t mean the marketing of extended life coolants has been perfect.

Since their introduction, extended life coolants have at times been incorrectly referred to as “set it and forget it” products. Suppliers believe that has caused misperceptions about the maintenance actually required for today’s coolants.

Every coolant available in the commercial vehicle market requires some type of maintenance, Goodheart says. “I’m actually really disturbed by ‘set it and forget it’ because it creates the impression you can ‘set it and neglect it’ and that’s not true,” says Turcotte.

“There’s no free lunch. Some people think extended life coolant means no maintenance and it doesn’t; it means minimal maintenance.”

Adds Dilley, “One of the worst things you can do is think ‘I’m not going to check it. It’s supposed to last me X amount of time.’ It doesn’t matter what coolant you have or what the [OEM recommended] service interval is, if you don’t follow those instructions you put the vehicle at risk.”

And when a truck needs more additives or coolant, the suppliers are unanimous that it’s best to refill the system with the current coolant and inhibitor/extender.

“The inhibitor packages and additives for all of these coolants operate differently,” says Goodheart. “One half plus one half doesn’t always equal one.”

Adds Turcotte: “It’s like mixing tomato soup with chicken soup. It isn’t very good and it doesn’t go together very well. You only want one.”

And water also should be added carefully, adds Doiron.

The suppliers cite 15 percent contamination as a safe operational barrier, and recommend flushing a cooling system if more than 15 percent of two coolants are present.

“I think one of the biggest problems we face [in educating the industry] is the non-educated technician or driver who thinks that coolant is just coolant and puts in whatever he can find,” says Granger.

Snyder says that’s far and away the bigger factor in the 40 percent service number associated with coolants. Compromised coolant increases the risk of liner cavitation, corrosion, leaking and overheating.

“When that driver pulls over and buys a gallon for top off purposes, what he adds really does make a difference,” Snyder says.

“It is hard to maintain [a] truck or fleet if you do not have a good handle on what type of coolant is being used,” says Doiron. 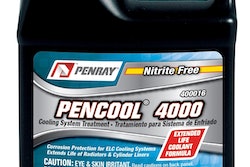 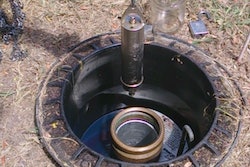 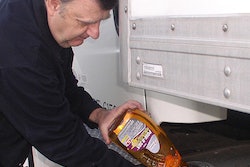 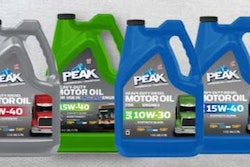