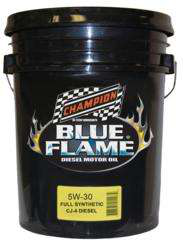 Champion’s SAE 5W-30 was found to deliver an average of 3.3 and up to 4.5 percent fuel economy improvement over a conventional SAE 15W-40 API CJ-4 lubricant tested at an independent testing facility using the SAE J1321 fuel test protocol, the company says.