In the auction sector, J.D. Power reports average pricing in its benchmark model for 2- to 6-year-old trucks was:

Overall, J.D. Power says 3- to 6-year-old trucks averaged 1.4 percent less in September than August and were down 12.2 percent from September 2021. Year over year, late-model trucks sold in the first nine months of 2022 averaged 50.9 percent more money than the same period of 2021. The company also reports 3- to 6-year-old sleepers have depreciated 5.8 percent per month on average.

Yet while year over year comparisons have turned negative, depreciation is relaxing.

"Late-model sleepers are still bringing 45 percent more money than the last pre-pandemic peak. We had expected pricing to fall another 20 to 25 percent before leveling out so, for now at least, the market is outperforming expectations," J.D. Power says. "Seasonality may have entered the picture, but the tight availability and high price of new trucks is keeping demand for sub-400,000-mile trucks extremely strong. Of course, this also means the price difference between low- and average-mileage trucks continues to increase."

Retail sales had similar price changes in September. J.D. Power says late-model sleepers lost 3.4 percent of their value in September, a figure roughly in line with the moderate monthly depreciation that began late in the second quarter. The company says year over year retail pricing comparisons "are still extremely positive, unlike auction pricing, which turned negative in September."

For the most common 2- to 6-year-old truck cohort, September's average pricing was:

J.D. Power also says 3- to 5-year-old trucks were down 3.4 percent from August but up 29 percent over September 2021. Additionally, trucks in this age group brought 63.7 percent more money in the first nine months of 2022 compared to the same period of 2021. The company adds depreciation is averaging 1.9 percent per month in 2022, although the more recent 3 to 5 percent per month is more indicative of current conditions. Retail pricing for late-model trucks is still 44 percent higher than the last pre-pandemic peak.

On a volume basis, retail sales per dealership rooftop averaged 3.2 trucks in September.

"This figure is still almost two full trucks lower than the historical average, but notably better than the historic low of 2.5 reached in July," J.D. Power states. "Lower pricing combined with somewhat increased acceptance of freight conditions has encouraged a few more buyers into the market."

In the medium-duty sector pricing was mixed across J.D. Power's three tracked segments.

Evaluating the entire medium- and heavy-duty space, J.D. Power says the auction environment was the big surprise in September.

"We had expected another 20 to 25 percent of depreciation to unfold before pricing started to level out. With the freight environment substantially cooler year over year and no obvious anomalies in the data, the market is currently outperforming expectations," J.D. Power states. "Of course, one month isn’t a trend, and seasonality is currently supporting values to some degree, so for now we’ll increase our optimism level a notch or two as we monitor incoming October sales data." 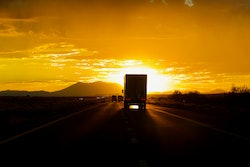 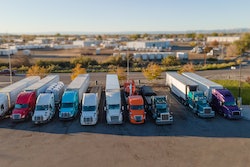 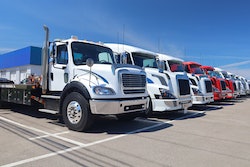 Price Digests: Salaries, job seekers and resale truck listings all on the rise 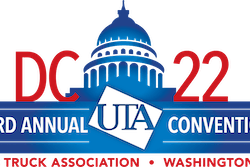