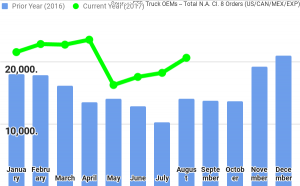 FTR estimates preliminary Class 8 net orders for August were 20,700 units, up 14 percent from July and 50 percent better than the same period last year.

“August orders continue the positive trend in the Class 8 market. Orders were up for the third straight month, and it looks like May’s 16,500 orders will be the low point for the year. Orders are expected to increase in September, leading into robust order activity in the fourth quarter,” says Don Ake, vice president of Commercial Vehicles at FTR.

ACT Research also showed a strong month for the Class 8 market, with preliminary Class 8 net orders improving on both an actual and seasonally-adjusted basis in August.

“Freight continues to show some impressive growth,” says Ake. “This has created capacity tightness in some regions which is expected to spread to more areas as economic growth expands. The capacity crunch will be exacerbated by the ELD mandate, spurring demand for trucks and trailers in 2018.”