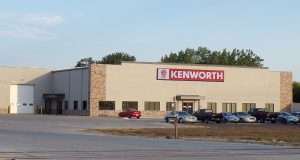 Sioux City Kenworth has moved its full-service dealership to a new building located on a major truck route in Sioux City. Sioux City Kenworth’s new 44,000 sq.-ft. facility sits on a 12 1/2-acre site and features a 16-bay service department that provides truck diagnosis within two hours through the Kenworth PremierCare ExpressLane, according to an announcement.

“We’ve invested a little over $5.5 million in the property and building of our new location in Sioux City, Iowa. We see great things happening there, and in the region, and even greater potential for future growth,” says Bill Rush, dealer principal at Sioux City Kenworth.

The larger site will enable Sioux City Kenworth to expand as nearly two dozen development projects in the area are completed this year, driving more anticipated business growth. In its March 2018 issue, for the third year in a row, trade magazine Site Selection, named Sioux City as the small-size metro area with the most active economic development projects in the United States.

Sioux City Kenworth’s new site is more than double the size of its previous location and provides plenty of room for drivers’ to park and maneuver their trucks. Located at 3900 Harbor Dr., one mile north of its former location, Sioux City Kenworth features access to U.S. Interstate 29 via Exit 143, Singing Hills Boulevard Exit.

“Since this new location is clearly visible from I-29, it offers local truck fleets and operators, as well as those traveling through the area, a convenient easy-to-find place to get their trucks serviced quickly,” Rush says. “When we designed and built this new location, we did so with an eye toward providing customers leading-edge support with room for a much larger parts inventory and the latest in technology to maximize their uptime.”

The location’s 12,300 sq.-ft. of parts display and parts warehouse can support the needs of both local fleets and truck operators traveling through Sioux City. The dealership also has a body shop with nine stalls, a wash bay, two paint booths and a service truck for remote servicing and emergency roadside service. A lounge with recliners, satellite television, work spaces and vending machines provides drivers with a comfortable place to relax and catch up on correspondence and paperwork while their trucks are serviced.