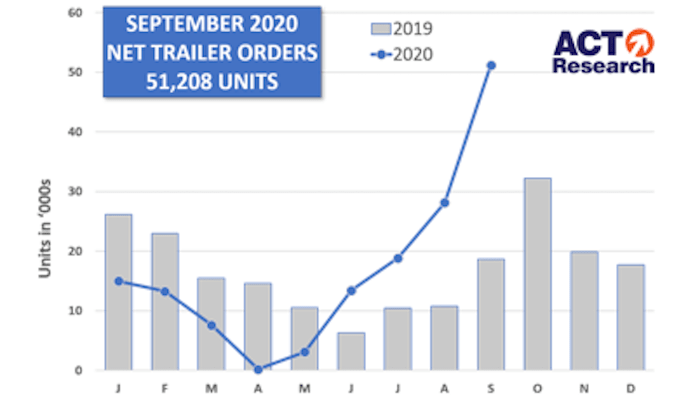 A combination of factors in September led to it being the third-highest monthly net volume in history for trailer orders, according to Frank Maly, ACT Research director–CV transportation analysis and research.

“Pent-up demand is one factor, as we’re now seeing capex release that was curtailed earlier this year by COVID-driven uncertainty. Another factor is lower build rates, pushing fleets to quickly submit their orders, rather than take a chance that new units might not be delivered until well into next year,” Maly says.

ACT says September net U.S. trailer orders of 51,208 units were a significant improvement (up 82 percent) from August’s uptick and well above September 2019’s level (up 174 percent). Before accounting for cancellations, new orders of 52,000 units were up 77 percent versus August and 140 percent better year over year, according to the most recent issue of ACT’s State of the Industry: U.S. Trailer Report.

“In addition to fleets, dealers could also be worrying about the timing of stocking orders; conversations have included mention of dealers entering the fray in preparation for next year,” Maly says. “Further solid numbers are likely in the near-term as the industry enters what has normally been its usual order season.”