Are you prepared for the AMT revolution?

Late last week I published a special report for Successful Dealer detailing the breakneck pace in which automated manual transmissions (AMTs) are being adopted in new heavy-duty trucks.

In it, I reported more than two thirds of dealers responding to a recent Successful Dealer survey claim to be specifying more AMTs for customer orders this year over last year, and amongst those responders, more than a quarter (27 percent) have seen take rates of the technology jump by more than 20 percent.

Conversely, the survey showed only 7 percent of dealers claim to be selling more manual transmissions this year than 2015, with the lion’s share of dealers (76.3 percent) admitting their manual take rates are down year-over-year.

Admittedly automated manual transmission technology is still fairly new—Volvo was the first OEM to make the transmission standard when it did so in 2007 and it’s only been in this decade that others have followed suit—but for an industry like the aftermarket where manual transmission maintenance, service and remanufacturing has been so lucrative for so long, I can’t help but think this adoption boom could soon become problematic.

It might not happen soon, but it’s likely going to happen eventually.

One theme that became clear to me when speaking with North America’s heavy-duty OEMs for the Successful Dealer piece is that OEMs are all in on the technology. They love the performance and durability benefits the technology offers over manuals—less driver influence equals less breakdowns—and they’re tickled to death by how many fleets are using the technology as a recruiting tool to withstand the industry’s driver shortage.

AMTs account for nearly 80 percent of the heavy-duty transmissions on the road in Europe and North American manufacturers believe that in due time, that number is attainable here.

Are you prepared for that?

From what I can gather in speaking to both dealer and independent aftermarket service providers for the Successful Dealer report is that while AMTs are less susceptible to breakdowns, when they do fail, they create a fundamentally different type of repair.

Manual transmissions wear down over time but once you open them up it’s easy for veterans techs to spot a failing component and replace it, says Rich Furtyo, service manager at JX Enterprises.

Automated manual transmissions aren’t like that at all. They’re operated by an electronic control unit (ECU), which means when they start to fail, it’s typically electrical not mechanical service that is required to get them fixed.

And you know how that can go.

Furtyo says even with access to manufacturer diagnostic tools, software and on-call support it can still sometimes take days and even weeks to identify root causes for AMT fault codes. He says customers don’t respond too well to that, but because the system is so intertwined with its technology, it’s the only way his technicians can properly complete the repair.

Once these transmissions hit your service bays, you’re going to be expected to do the same.

The Right to Repair Memorandum of Understanding insures you will have access to the same diagnostic tools and software Furtyo’s technicians are using, and in the case of non-OEM transmissions such as the Eaton UltraShift, you should also be able to get your hands on some valuable manufacturer training. But you’re likely not going to be swapping out hard parts anymore.

I guess my end game here is to warn you that if transmissions are a large part of your business that you intend to keep, you need to hit the books and start learning about these AMTs.

You need to educate your technicians about the different models available in the marketplace and download the software and purchase the tools necessary to read fault codes and determine root cause. You need to search for training—either from manufacturers or third-parties—that can get your team prepared, and start stocking some of the common switches, sensors and other electrical components that are going to be used to solve most AMT repair puzzles.

And once you’ve done that, you need to tell your customers.

Because you don’t want to invest all of your time and money into this only to see your customers go back to the dealer because they assumed you couldn’t fix a proprietary OEM transmission.

Especially if they’re going to be 80 percent of the market. That’s simply too much business to miss. 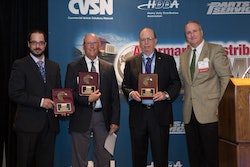