In an era of rapid change in the commercial vehicle industry, Eaton laid out its technology road map for the next 10 years and beyond during a press conference Sunday at the 2017 Technology & Maintenance Council (TMC) Annual Meeting in Nashville, Tenn. Future 48-volt battery systems will be a major change catalyst for trucks, said Larry Bennett, director of engineering, technology and innovation.

Future bans on internal combustion engine-driven commercial vehicles in cities will be a major driver in electrification systems. “There will be a lot of electrification,” said Bennett. “You’ll start to see engine accessories taken off the engine and powered with electric machines that are used only when they are needed to reduce parasitic losses.”

This will also lead to a broad range of voltage requirements for non-propulsion systems on trucks, but Bennett said the industry trend is moving toward 48-volt systems. “There will still be 12-volt and 24-volt components, but 48 volts is much more efficient to drive components electrically and seems to be the limit before you have to put in significant safety precautions.”

In its effort to create a totally enclosed intelligent power management system, Eaton has been working with the U.S. Department of Energy on battery management to increase life of battery, minimize size and weight and lower cost.

“We can leverage skills across Eaton’s business to efficiently manage the electrical power on board by generating power at the transmission, creating a subsystem and allowing the OEM to put the power management system onboard that becomes a plug-and-play for a variety of voltage systems,” said Bennett.

To accomplish this, Bennett said changes are required to allow the transmission to help manage the electrical power, including removing the starter and generator from the engine and mounting those on the transmission.

“By having the generator on the transmission, you can potentially run the air conditioning compressor,” said Bennett. “When you pull into a rest area and put the truck into ‘hotel mode’ you don’t have to have an $8,000 auxiliary power unit. You can use the batteries on board the vehicle to drive that electric machine and have it drive the AC unit, allowing ‘hotel mode’ with the existing system.”

In the next five years, Eaton plans to transfer valvetrain technologies from passenger cars to commercial vehicles, including electro-mechanical valvetrain actuation. Other efforts will include torque filling, battery smart charging, over-the-air programming and intelligent vehicle systems.

Within six to 10 years, “Increasing stringencies will require engine people to really look at the technology going into their engines,” said Bennett. “As you go to tech like downsizing, you have to augment the engine and look at hybrids and adding electrical components to help propel the vehicle.”

Beyond the 10-year horizon, Bennett said the trucks of tomorrow will be managed within their ecosystem, which includes vehicle-to-vehicle and vehicle-to-infrastructure. “Those will drive constant communication to help that truck make decisions on how to run the next 10 seconds or 30 seconds,” he said.

Eaton also provided an update on its soon-to-be-released automated docking system announced at last year’s IAA Show in Hanover, Germany. That system uses the transmission as a sensor so as the truck backs into the dock in creep mode and makes contact, it shuts the system down and applies the brake.

The company said it is leveraging that technology to provide a self-coupling feature. “The system takes over backing the vehicle into the kingpin to make that a much less violent maneuver,” said Bennett.

Both the auto-docking and self-coupling systems will be available on select Eaton automated manual transmissions and retrofittable on AMTs running the latest software versions. 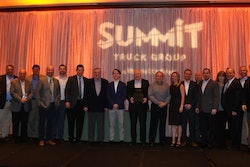 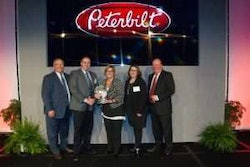 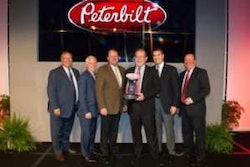 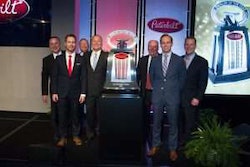