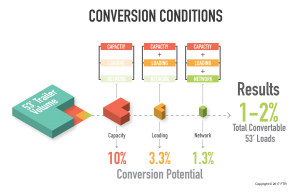 Ever since early mechanics bolted small cargo beds on to the backs of their Model T’s, the history of the truck industry has been occasioned by debate over the proper maximum size of trucks, FTR says. Fundamental to the issue is safety. Automotive drivers are understandably cautious about sharing their highways with much larger vehicles.

Importantly, technology has continued to develop, making possible the safe, effective operation of larger trucks, including significant advances since the last expansion of length limits in the early 1990s.

FTR says it is in this context that the industry, and its regulators, are debating a proposal to increase the permissible federal maximum length of double trailers from the current 28 ft. to 33 ft. Such a change would increase the overall length of a combination rig by ten feet. 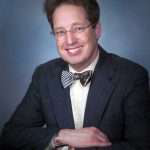 Led by Perry, FTR has reviewed the economics of such a change and the potential impacts that it could have on both the trucking market and the general public. The company says it has become clear from its findings that “double 33 ft. trailers are not a generic option for truckload operators. Yes, some small niches, say the movement of caskets or insulation, could adopt such combinations for some lanes, but the expansion of doubles use among truckload carriers would be very limited.”

FTR’s analysis shows LTL (Less-Than-Truckload) and Parcel carriers would be the prime users of the larger combination trailers. And based on the relatively optimistic inputs that were used, FTR says load conversion is just in the 1-2 percent range.

FTR says there are several reasons for using double trailers; however, only one deals with the capacity of the trailer. For shippers of low-density freight that fills the trailer before it hits the maximum allowable weight, two 28 ft. trailers (the current regulatory maximum) offer just a 4 percent advantage in loading capacity over a standard 53 ft. single trailer. That advantage is equivalent to adding nearly two full pallets per combination.

However, the ruling reason for the use of doubles is what the industry calls ‘unit’ loading, a common practice in LTL and Parcel operations. Since the cube advantage over 53 ft. trailers is relatively small, the main reason for a carriers’ preference for doubles is to avoid the re-sorting required to consolidate many customers shipments as the freight moves across the hub and spoke terminal networks, FTR says. 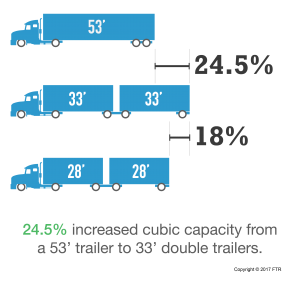 In looking at both the pros and cons of this idea, FTR found three clear findings. First, for the segments affected there will be a definite cost savings – as much as 10 percent. Second, the significant reduction in trucks on the road (up to 18 percent fewer trucking rigs in the affected segment) would lead to lower emissions, less highway wear, and less congestion. Third, the proposed change would affect only a small segment of the trucking market. It would largely affect current LTL and Parcel operators who support the change and are already running double trailer operations, the company says.

Also, FTR says it is notable that trucking costs do not increase in proportion to the length of a trailer, so 33 ft. trailers are cheaper to operate than 28 ft. trailers (on a per-ton basis). In over-the-road (OTR) operations where 33 ft.  trailers are substituted for 28 ft. trailers, costs should go down by 10 percent.

FTR adds that the better news is the public will get more than just savings when buying their blue jeans. The benefits of fewer combinations to move the same freight are sizable reductions in engine emissions, highway congestion, and pavement wear per ton of freight. While limited in scope, FTR says the capacity advantages of 33 ft. combinations could encourage their use in a few highly-specialized, low-density freight business segments. The drawbacks associated with the increased handling and the need for additional loading space is likely to prevent their use in the overwhelming majority of truckload freight. This change is a niche play only, the company says.

As policy makers consider this change, FTR says they would do well to contrast it with other difficult, complex, and expensive changes before them. FTR says a change to 33 ft. combinations: