How perseverance and positivity put the incredible in The Incredible Hulk 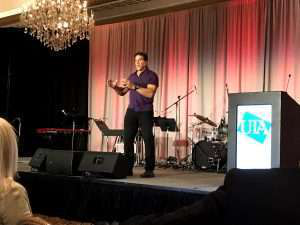 He remembers when his mother would talk to him. He’d see her speaking, watch her lips moving. He just couldn’t hear the words.

That was early life for ‘deaf Louie,’ or the man who the world later come to know as The Incredible Hulk. Yes, Lou Ferrigno remembers the pain of his childhood. The fear and anger and he felt as a young child losing his hearing.

But looking back at those years, and the circumstances he dealt with, Ferrigno says his loss was ultimately what motivated him to change his life. To become the youngest Mr. Universe in history, and one of the most famous bodybuilders in the world.

And it’s that message that Ferrigno brought to his keynote address Thursday at the Used Truck Association (UTA) annual meeting in Las Vegas. Life is rough and unfair. Ferrigno says you can accept that and wallow in your sorrow, or you can make your life better. He says there should be no choice.

“Every one of us has a fear factor. So many of us are in denial about what we can be,” he says. “Everyone has a superstar quality inside of us that we can pull out.”

Ferrigno says he started doing that at 13. He had a rough childhood due to his hearing loss (he lost nearly 75-80 percent of his hearing around 3) and how people around him treated him, and it made him angry. He didn’t sign up for be deaf, he didn’t want that life, and it frustrated him to no end that he couldn’t change that.

But he could change the rest of his body. He could strengthen the rest of who he was. So he hit the weights.

He won his first contest in his late teens, and followed in his idol Arnold Schwarzenegger’s footsteps to grab his first Mr. Universe title at 21. That title nabbed his a Guinness world record he still holds—the youngest Mr. Universe contest title winner ever.

During his speech on Thursday, Ferrigno urged the audience to face their fears. To challenge themselves to improve who they are. He says the benefits are self-evident. Not everyone aspires to be a walking, talking superhero, but we all have areas of our personality and body we can improve. Ferrigno says by identifying and facing your fears you can beat them. You can be a better person.

He says the best thing to do is to sit down, right now, and decide what you want to change. Then start slow. Make little changes today that can snowball into larger lifestyle changes over time. He uses public speaking, another of his past fears, as an example.

“Don’t start with a full room like this, start with four or five people,” he says. “Build yourself up.”

And accept now you’re going to fail a lot before you start succeeding.

“I love to be the guy who gets knocked down and then gets back up again because I’m determined,” he says. “Embrace the fear and be positive.”