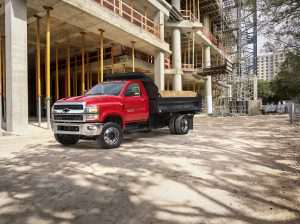 Chevrolet is going after a larger slice of the commercial truck segment by jumping into the Class 6 market with a Silverado 6500HD.

The Detroit truck maker on Wednesday at the Work Truck Show in Indianapolis revealed its largest flagship pickup lineup to-date with the first-ever Silverado Class 4, 5 and 6 chassis cab trucks, which were developed in partnership with Navistar.

Available in 4500HD, 5500HD and 6500HD, in regular and crew cab models and in two or four-wheel-drive, the trucks will be powered by a 6.6-liter Duramax diesel engine with 350 horsepower and 700 lb.-ft. of torque and matched to an Allison transmission with a Power Take Off (PTO) option.

“There’s no mistaking our new truck for anything but a Silverado,” says John Schwegman, director of Commercial Product and Medium Duty at GM Fleet.

Peper says the new 6500HD is rated up to 22,500 lb., deep into the Class 6 GWVR and beyond where you would find a Ram. The heaviest Silverado is expected to compete a Ford Class 6 truck that is built on a frame unique to its other medium-duty pickups. 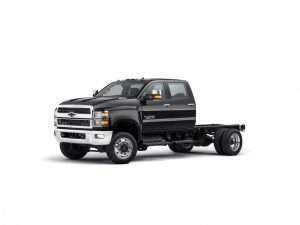 A lightweight, front-hinged “clamshell” hood that, combined with a 50-degree wheel cut, allows easy walk up access to under-hood components. A precisely crafted and contoured hood optimizes the driver’s perspective of the road.

“In the truck, you’ll sit up high but visibility over the hood is great,” Schwegman says. “Best in class even.”

A factory-installed rear air suspension is available. Triple-sealed, inset doors to help reduce wind and road noise and huck bolts used throughout the frame for superior clamping force helps eliminates squeaks and rattles. The DEF tank is conveniently located on the passenger side of the truck, opposite of the fuel fill.

The Silverado will also be the among the most connected commercial truck available, thanks to options that include OnStar and Commercial Link, a built-in 4GLTE Wi-Fi hotspot (paid data plan required), wireless cellphone charging, Bluetooth and support for Apple CarPlay and Android Auto.