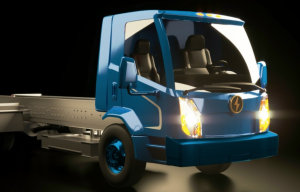 The eLionM is a 160 kWh vehicle, custom-built with a low-floor for the paratransit, transit and urban segments. It features a range of 150 miles on a single charge. The electric motor offers up the equivalent of 200 horsepower.

“The eLionM will serve so many purposes that we already nicknamed it our ‘Swiss Army Knife,’” says Lion founder and CEO Marc Bedard.

Lion says it is the only integrated OEM that makes its own chassis, battery packs and body in this segment and spent the last eight years designing and developing all-electric vehicles and the last three years commercializing its all-electric Type C school bus.

Lion plans to manufacture a new line of all-electric trucks next year, using the technologies developed over the last eight years across its lineup. The company is targeting medium to heavy-duty urban trucks in classes 5-8 in applications ranging from ambulances to service trucks, cranes and delivery trucks.