Bypass filters promise to deliver cleaner oil and all the benefits that come with it.

Randy Fields is not that surprised at the way soot can damage engine components. After all, the abrasive particles found in aging engine oil have a lot in common with coal and diamonds. “The difference between the three is heat and time,” says the president of Filtration Solutions Worldwide. “If (soot) is not removed and controlled, it gets very, very hard and very abrasive.”

Soot is just one of the threats that lead many engine owners to install bypass oil filters. 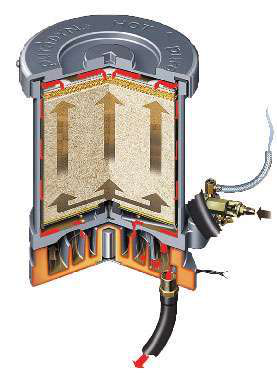 While full-flow oil filters already catch particles larger than 20 microns in size (a human hair is at least 50 microns wide), bypass systems feed some of the engine’s oil through a secondary treatment process in a bid to capture remaining contaminants.

The actual technology behind this added filtration can vary. Some systems rely solely on upgraded filter media, while others boil away contaminants, or use the power of centrifugal force to sling unwanted dirt out of the lubricant.

But the users of the equipment tend to fall into one of two camps: Those looking to reduce the cost of oil changes, and those who are focusing on the wear characteristics, says Fields, whose company makes the FS-2500 filtration system.

Bypass filters certainly will be a familiar sight to those who work on equipment used in dirty environments like those found in the mining sector. Depending on the value of the commodity being extracted, the cost of engine downtime could reach thousands of dollars per hour, explains Kevin Kroger, president of Puradyn, a bypass filter maker.

Indeed, the engine downtime in a coal mine could sacrifice $35,000 to $45,000 an hour in production costs, Fields agrees. And the costs of downtime in a gold mine were pegged as high as $50,000 an hour when the precious metal was worth half of what it is today.

“They look at it from a wear perspective, longevity and uptime,” he says. To compound matters, the equipment in a mine tends to have sumps which hold hundreds of gallons of oil, all of which would need to be replenished during an oil change.

Of course, the bypass systems are not limited to these extreme conditions. On-highway equipment also can benefit from the added filtration, which can help to extend oil drain intervals.

An owner-operator who is driving 140,000 miles a year can expect to change oil every three weeks, Fields says. In contrast, he claims those with his company’s bypass systems are averaging 70,000-mile drain intervals. 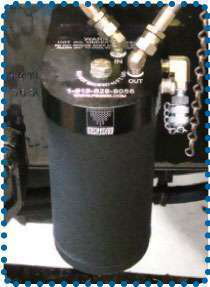 Bypass filters feed some of the engine’s oil through a secondary treatment process to try to capture remaining contaminants.

The exact size and volume of contaminants that need to be captured is a matter of debate among those who sell the equipment. What we do know is the gaps between moving parts will fall anywhere between 2 and 22 microns, depending on the position of the crank, and a protective film of oil itself will tend to be about 1 to 1.5 microns thick.

Given that, the Puradyn systems are designed to capture particles which range from 0.5 to 1 micron in size. The Spinner II, meanwhile, taps into a vehicle’s air supply to spin at speeds of more than 6,000 rpm, depositing a solid cake of contaminants on the inner wall of a cleanable rotor. It claims to catch particles as small as 0.10 microns.

Every system also should be judged on the amount of oil it will treat in an hour, Fields adds, referring to factors such as the flow, rate and efficiency of the design.

The equipment is not always limited to capturing unwanted particles, either. The Puradyn system, for example, includes an evaporation chamber to help address the water which can deplete additives.

Any evaluations also should consider the volume of make-up oil that is introduced, Kroger insists, referring to one ongoing cost that often may be overlooked. After all, bypass filter systems have been known to hold up to five gallons of oil.

While the installation procedures for a bypass filter will vary from one system to the next, the equipment usually is mounted near the primary filters, where it can draw a portion of the oil without affecting the overall flow of oil through the engine.

Most of the models can be installed in one or two hours, tapping into the 3⁄8-in. or ½-in. ports that engine makers include for auxiliary devices.

But there can be differences in the related components, depending on the engine models themselves. Filtrations Solutions Worldwide, for example, has 1,700 kits which address the choice of mounting hardware, hose lengths and brackets. And the specific size of a Puradyn system will be dictated by the capacity of the oil sump.

In the case of Puradyn equipment, the unit itself needs to be mounted in a vertical position, making sure the return hose has a steady downhill flow. The base of the unit will typically be 12 in. above the running level of the oil.

If the baseline of the engine is used, it will be eight to 10 in. above the point where the oil pan marries to the engine block. “If I’m at the back firewall of the chassis and the oil drain is in the front of the engine, you need to lean toward the 10 in. side,” Kroger says.

When installing a Spinner II/ 960, meanwhile, the inlet hose runs from the point of highest pressure, and the outlet hose runs to the crankcase above the oil outlet. An air inlet hose is fed to any point on the air supply to the air valve cartridge’s inlet.

Granted, recent changes in engine designs have offered engineers a few challenges when deciding exactly where the bypass filtration systems can be installed.

Fields loved older Caterpillar 3406E engines when it came to installations, but his company’s equipment needed to be modified to account for the space required by the engine-maker’s emission-cleaning ACERT technology. “There’s a lot of the cooling apparatus near the frame rail when we had to mount it,” he says. “The ports where we pick up the pressure and return had to change.”

Regardless of the equipment that is installed, an ongoing oil analysis program will be needed to support any extended-drain intervals.

Fields says the first test results should take a look at a virgin sample of oil, straight out of the bottle. This will set the baseline for everything from additive packages to the Total Base Number and viscosity. “Then as the used samples come in, we call the customer good or bad on every sample and help them with the interpretation of the lab results,” he says.

“The hardest work the engine is going to do is in that first 10,000 miles,” Fields says. “It’s like throwing a dry sponge in a bucket of water.”

And like any other sponge, the true value of these systems can be found in the way they clean.